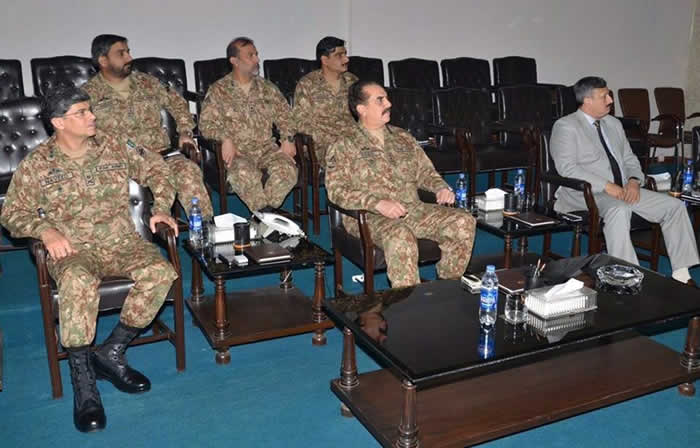 Chief of the Army Staff Gen Raheel Sharif on Wednesday “vowed to go to any length” for peace in Karachi, sending out a message that there would be no let-up in the Rangers-led operation in the city. The statement came only two days after he announced that he would retire on the due date.

The fresh resolve from Gen Sharif came during his visit to the Corps Head­quarters Karachi, where he met heads of intelligence apparatuses of the armed forces, the corps commander and the Sindh Rangers chief. He commended their efforts for peace in the city.

A brief statement issued by the Inter Services Public Relations (ISPR) suggested that the “special security meeting” solely focused on the Karachi operation, results achieved so far and a future line of action. “The Chief of Army Staff visited the Corps Headquarters and chaired a special security meeting,” said the statement. “Corps commander, DG Inter Services Intelligence (ISI), DG Military Intelligence (MI) and DG Rangers were present. He [General Sharif] was briefed in detail regarding the ongoing Karachi operation, including intelligence-based operation.”

It was the second visit of the army chief to the city in one month. Last month, he accompanied the prime minister and attended a high-level meeting at the Governor’s House to discuss the city’s security issues with civil and military leaderships. He had also held a separate meeting with the Corps Commander and directors general of ISI and Rangers to discuss the same issue.  As political circles and media are largely focused on Gen Sharif’s announcement of retirement on time, his resolve for peace in Karachi came as first such release from the ISPR after the Jan 25 statement that had ended growing speculations about an extension in his tenure. The statement signaled that the military establishment had not changed its priorities and future plans.

Apart from the brief statement, photos released by the ISPR showed the army chief, along with Corps Commander Lt Gen Naveed Mukhtar and DG ISI Lt Gen Rizwan Akhter, listening to Rangers Director General Maj Gen Bilal Akbar’s briefing. The statement concluded with the army chief’s resolve about the Karachi operation, suggesting it was not going to end any time soon. “The COAS vowed to go to any length for a secure and terror-free Karachi so that people could carry on routine activities,” it said.