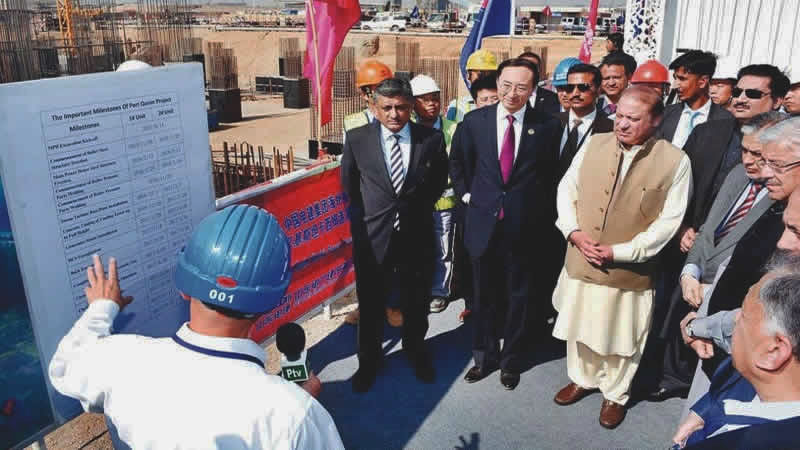 Prime Minister Nawaz Sharif has rejected a perception that the federation is interfering in Sindh’s affairs and assured that reservations of the provincial government will be addressed in accordance with the law and the constitution.

The prime minister, who was in Karachi on a day-long visit on Monday along with Finance Minister Ishaq Dar and Commerce Minister Khurram Dastgir Khan, held a brief ‘unscheduled’ meeting with Chief Minister Qaim Ali Shah at the airport.

“The federation has all respect for provincial autonomy,” Mr Sharif assured the chief minister. Mr Shah will visit Islamabad where the officials concerned will also be called to find an amicable solution of the issues confronting Sindh. The prime minister, according to informed sources, expressed these views in response to the chief minister’s complaint that the centre was not paying heed to Sindh’s reservations over the issue of Rangers’ powers and that Interior Minister Chaudhry Nisar Ali Khan was interfering in the province’s affairs. “Even you are not listening to us; tell us what should we do,” Mr Shah complained to the premier. The prime minister said: “You are a senior politician. Issues are resolved through talks. We are not interfering in the affairs of your government.” Mr Sharif told the chief minister that the federal and Sindh governments would jointly continue the operation in Karachi and “we will also listen to your reservations in Islamabad where all will be called to sort out problems on the table as the federation believes in resolving all issues through negotiations”.

After the brief interaction, the chief minister, instead of accompanying the prime minister to Port Qasim, went to the National Institute of Cardiovascular Diseases for a medical check-up. After getting some tests, including ECG, done and taking rest for two hours in the hospital’s private wing, he returned to the Chief Minister House. A Sindh government spokesman said that because of busy schedule for the past couple of days without proper rest Mr Shah was feeling some physical exertion. After going through the test reports, doctors found him fit, but advised him to take complete rest for a few days, he added. Addressing the 39th Export Awards Trophy function held by the Federation of Chambers of Commerce and Industries at a hotel, Prime Minister Sharif said elimination of terrorism from the country and complete restoration of peace in Karachi were “our mission and we would not leave this work incomplete”. He said the Karachi operation was a difficult decision, but the difference between its launch three years ago and today was before the nation.The prime minister praised the role of the DG Rangers, the Sindh IG, the chief secretary and the administration in restoring peace in Karachi.

The operation was launched in September 2013 with consensus of all political parties and now peace had returned to the city. “Our all attention is on complete restoration of peace and we will not leave this work halfway.” He said the Thar coal project was the country’s future energy source, adding that 10,000MW would be added to the system by 2018 and additional 15,000MW by 2025. Mr Sharif said that when he came to power, there was an acute shortage of electricity and the economy was facing challenges because of law and order. The government first focussed on restoring law and order and then overcoming the energy crisis. He said power projects were being launched in both private and public sectors. In Thar alone, power projects of 3,960MW are being installed and coal excavated from the area will be used in other power projects in the country. Besides, he said, 3,600MW electricity would be produced from liquid gas. The prime minister claimed that transparency and quality assurance in these projects had resulted in the saving of Rs100 billion, which would be used for installing more power projects. He said that besides coal-based power projects in Karachi, two nuclear power projects – K-2 and K-3 – were also being installed. He said the Diamer-Bhasha dam would produce 4,500MW, Tarbela 1,300MW and Neelum-Jehlum 9,060MW. He said work on the Lahore-Karachi motorway was under way.

The prime minister on the occasion announced a reduction of three rupees per unit in power tariff for industrial consumers from January and an end to loadshedding by 2018.During his visit to the coal-fired power plant at Port Qasim, which will start producing electricity by Dec 31, 2017, Prime Minister Sharif said that early completion of energy projects was a priority of his government and announced that the government would provide every possible security and facilities to investors in the power sector. He said China was the most important friend of Pakistan and the Pakistan-China Economic Corridor was a symbol of progress. Chinese engineers briefed the prime minister on the power plant launched at a cost of $1.5 billion. The plant consists of two units of 600MW each. Chinese Ambassador Sun VI Dong informed the prime minister that the plant was of international standard and his country is providing all possible assistance for its early completion. The prime minister praised the Chinese engineers and said his government was keen to see the projects completed in time. Earlier, the prime minister was briefed on the ongoing projects at Port Qasim. There are 250 industries in its industrial zone with eight operational terminals. The LNG terminal has been completed in record 11 months, where LNG will be converted into gas and supplied through pipeline.