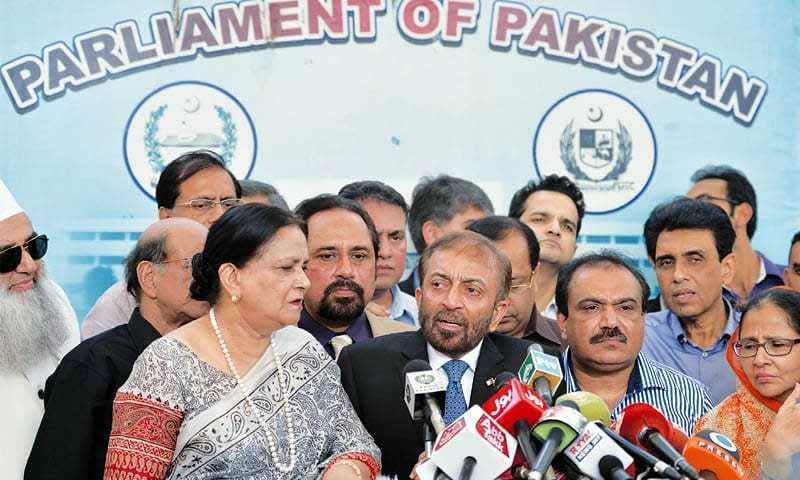 The Mutahida Qaumi Movement (MQM) senators have mutually consented to take back their resignation from the Upper House of the Parliament and are expected to attend the session tomorrow (Monday), it has been learnt.

The senators who earlier resigned this year following a protest by their party against what it called the extrajudicial killings and disappearances of its workers at the hands of law enforcement agencies in Karachi.

MQM Senator Tahir Hussain Mashhadi told the scribe that “the MQM senators will meet the Senate secretary tomorrow to withdraw their resignations”. “MQM Senators will attend the Senate session tomorrow while the MQM members of the National Assembly will attend the upcoming session of the Lower House on November 6,” the MQM Senator said. Mashhadi said that a notification to set up a Grievance Redressal Committee (GRC) to address the grievances of MQM on the ongoing Karachi operation was already issued by the government while the committee is in process to complete its findings that’s why the party has decided to withdraw their resignations from the national and provincial assemblies and the Senate.

Earlier, the federal government had issued a notification on October 16 to form a five-member grievances redressal committee that was given the mandate to register and resolve concerns raised by the MQM related to the Rangers-led security operation in Karachi. It was after the MQM announced their decision to withdraw the resignationsand rejoin the national and provincial assemblies and the Senate. In this regard, a memorandum of understanding was signed between MQM and the government following a successful dialogue process between the two sides. The MQM has also demanded an end to the restrictions placed on the party’s social and welfare activities and hopes that the committee would address their grievances in a timely manner.