Election Bar On Banned Outfits to be Strictly Enforced 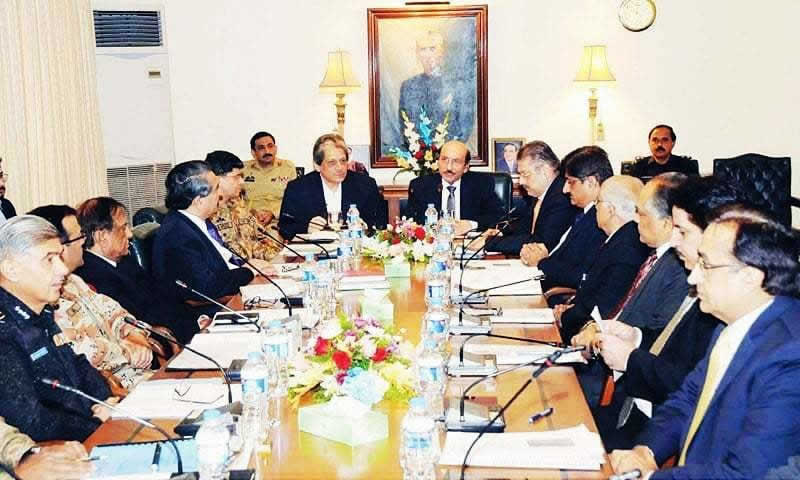 Election bar on banned outfits to be strictly enforced

The Sindh apex committee decided on Tuesday that no member of outlawed organisations would be allowed to contest the local government elections whose first phase would be held in eight districts of the province on Oct 31.

A meeting of the committee presided over by Sindh Chief Minister Qaim Ali Shah also decided against allowing any banned organisation to collect hides of animals during Eidul Azha.

Only welfare organisations may collect the hides if they follow the official code of conduct. The meeting was attended by Governor Dr Ishratul Ibad, Karachi Corps Commander Lt Gen Naveed Mukhtar and other senior officials.  Talking to journalists after the meeting, Sindh Information Minister Nisar Ahmad Khuhro said it was a follow-up meeting of the federal apex committee and was aimed to review the pace of implementation of decisions.

He said the federal government had decided to set up five military courts in the country, including one in Sindh, and that the province would soon appoint a judge for the trial of cases. Mr Khuhro said the meeting, which lasted more than three hours, decided that all local and international non-governmental organisations operating in Sindh would have to obtain a security clearance. The international NGOs would have to get themselves registered with the federal government and the local ones working in Sindh with the provincial government.

He said that about 257 private security firms operating in Sindh would have to get security clearance and have their guards trained by Sindh police. They will not be allowed to hire foreigners or have partnership with them. He said that so far 67 security firms had been registered after verification. Mr Khuhro said there were 9,590 religious seminaries across Sindh and 6,500 of them had been registered with the government. He said a 10-member committee comprising five members each from religious institutions and the government would formulate a code of conduct for registration of seminaries.

He said that foreign students who wanted to apply for a Pakistani visa would have to identify the madressah where they had got admission. The apex committee also decided that arms licences of all those people who had failed to get the document renewed and computerised would be cancelled and the home department would confiscate their weapons. The meeting decided that the number of CCTV cameras in Karachi would be doubled. It decided to register all illegal foreigners, including Afghans.