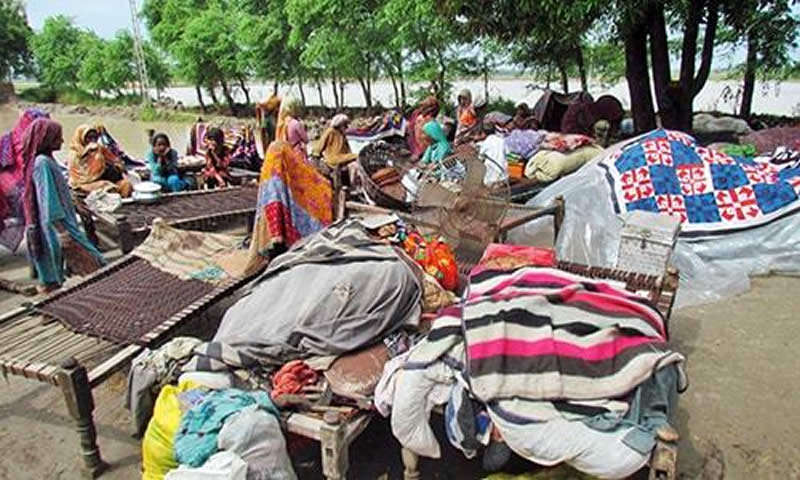 At least nine persons were killed, scores of others injured and several hundred thatched houses damaged as heavy rains continued to lash most areas of the interior of Sindh on Monday.

Rainwater coupled with spillage from overflowing canals and the Indus River caused flooding of several thousand acres of farmlands and played havoc with the civic infrastructure and badly damaged the electricity, telecommunication, drainage and road communication, besides disrupting water supply system in Sukkur,

Jacobabad, Kandhkot-Kashmore, Tharparkar, Umerkot, Mirpur­khas, Hyderabad, Badin, Nausha­hro Feroze and several other districts. Transportation of milk, meat, vegetables and other farm produce to markets was also hampered. Three persons were killed and two others were injured in rain-related incidents in Kandhkot-Kashmore district on Monday. An eight-year-old girl drowned when she was swept away by currents in the Indus at Pahelwan Bhangwar village near Kandhkot town.

She was yet to be identified. A four-year-old girl, Reshman, daughter of Behlaj Jafferi, was killed when the wall of a house collapsed in Ali Murad Jafferi village near Tangwani town of Kandhkot-Kashmore district. A shopkeeper, Qurban Burirro, was electrocuted while working in his shop in Thull town of Jacobabad district during rain. Two children, Zahid and Akbar Ali Jafferi, were injured when the roof of their thatched house collapsed during rain in Babu Jafferi village near Thull.