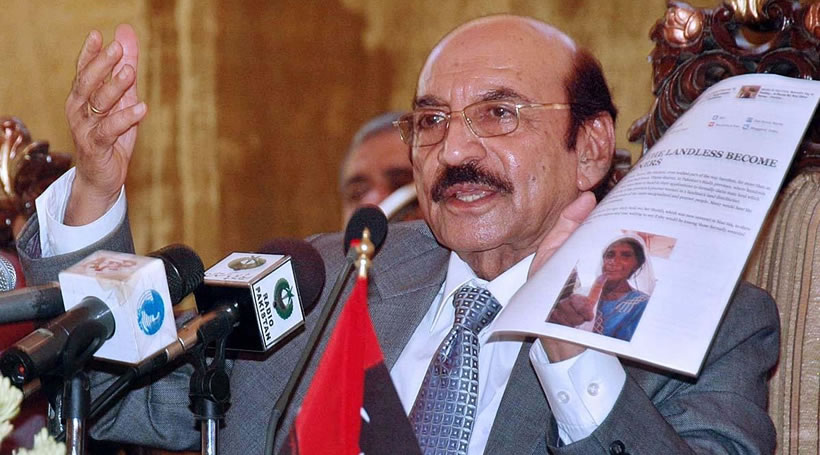 KARACHI: Irked by Rangers who he believes have been “acting beyond their authority and mandate”, Sindh Chief Minister Syed Qaim Ali Shah on Tuesday hinted at a bargain with the paramilitary force in return for an extension in their stay across the province.


“After the 18th amendment to the Constitution, the Sindh government is bound to seek concurrence from the provincial Assembly before allowing the Rangers to continue its operation,” said CM Shah. “The ways and means to give them another extension would be explored, but we have to talk to them [Rangers] first.”

Speaking to reporters after a programme held to give compensation cheques to the heirs of the Safoora bus carnage victims, the CM repeatedly said it was decided with consensus that the Rangers operation would be against four heinous crimes — terrorism, targeted killing, kidnapping for ransom and extortion.

Recently, the CM wrote a letter to the Rangers director-general after the paramilitary force took action against some of those allegedly involved in financial crimes, including land scams. He stated in the letter: “Pakistan Rangers is acting beyond their authorities and mandate given to them by the Sindh home department. It is therefore advised to cease such unacceptable roles beyond the notified mandate, requiring you to limit your movement in accordance.”

During his interaction with journalists on Tuesday, the CM recalled that the Rangers were called in by the Sindh government long ago and their stay in the province had been extended from time to time.

“But this time there is a bottleneck about giving them extension as after the passage of the 18th amendment to the Constitution, the Sindh government cannot extend their stay. We have to take it to the assembly for approval,” he added.

He said that legal and constitutional experts informed the provincial government that the Sindh Assembly was the competent forum to grant another extension to the Rangers to continue their operation in the province.

The period of Rangers stay in Sindh is nearing completion.

CM Shah said that as the matter should have been placed on the agenda of the assembly at least two months earlier, the Sindh government was exploring ways and means to give the paramilitary force another extension. “But we have to talk to them first,” he said, without elaborating.

Responding to another question, Mr Shah said that the services and sacrifices of the Rangers and Sindh police could not be forgotten.

He gave full credit to Chief of the Army Staff General Raheel Sharif for the performance of Rangers in the province. “The army chief took personal interest in launching a strong operation. That’s why we have received encouraging results; otherwise Rangers were already in the city and all over the province.”

In response to another question, he said that Interior Minister Chaurdhry Nisar Ali Khan had phoned him and he conveyed to him all his reservations and apprehensions.

Earlier, the CM distributed cheques among the heirs of the Safoora tragedy. The heirs of each slain person was given a cheque for Rs500,000, while the wounded got a cheque for Rs200,000 each. Forty-five people of the Shia Ismaili community were killed and six wounded in the Safoora bus tragedy.

Leaders of the Ismaili community welcomed the CM and thanked him for his personal interest in tracing and arresting the perpetrators. Speaking on the occasion, the CM said that he was in Islamabad when the tragedy took place. “I cut short my visit and rushed to the spot and shared my sorrow and grief with the Ismaili community and Prince Karim Aga Khan.”

He said that he gave the task to the police to detect the case or face the consequences. “My police department is efficient and hardworking. They not only detected the case but made important arrests for which I gave them cash prizes,” he added.