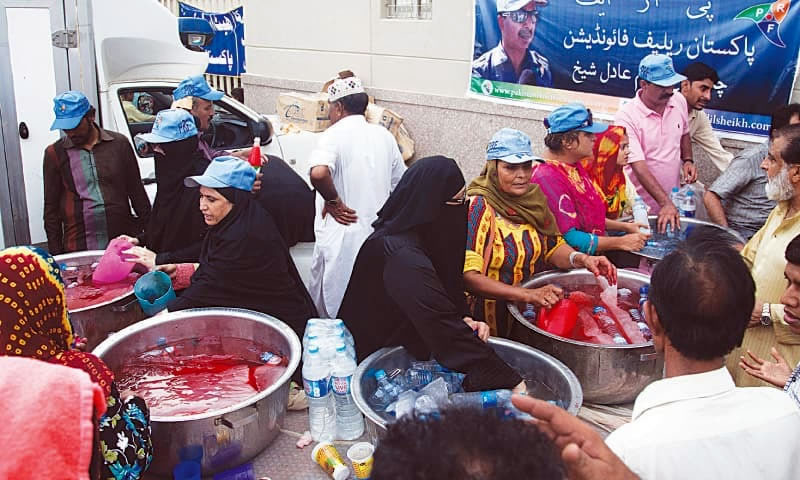 While the punishing heatwave gripping Karachi since Saturday showed signs of subsiding, the death toll across Sindh rose to 1,011, with at least 229 fatalities reported on Wednesday by government and private hospitals.

Wednesday’s figures included the five-day tally of 23 deaths reported by a private hospital which had not released it earlier.

Officials said that about 40,000 people had suffered heatstroke and as many as 7,500 of them were treated in Jinnah Postgraduate Medical Centre (JPMC), where 311 people died. “More than 1,000 of the 40,000 heatstroke victims have died since Saturday evening, of which 950 deaths were reported in Karachi alone,” said a senior official. According to the figures collected from various hospitals, of the 950 deaths in Karachi, 729 were recorded in government-run health facilities and 221 in private hospitals. The officials said the number of patients arriving in hospitals had ‘significantly’ dropped with the weather getting better, yet there were thousands of patients being treated in different health facilities. The gravity of the situation could be gauged from the fact that only Abbasi Shaheed Hospital and other hospitals run by the Karachi Metro­po­litan Corporation treated 17,382 patients till Wednes­day evening.

Of them, 207 died since Saturday. The officials said 15 people died in Hyderabad, two in Naushahro Feroze and five in Badin, bringing the five-day tally to 61 recorded in other districts of Sindh. Meanwhile, moving scenes were witnessed in hospitals across the city where relatives were seen crying with ambulances arriving one after another. People, youths in particular, continued to donate medicines, juices and bottled water to patients as well as hospitals. The hot and humid weather got milder and a change of wind pattern brought some respite from the suffocating heat. After almost a week, the maximum temperature dropped to 37 degrees Celsius on Wednes­day. The minimum temperature was 30.5 degrees Cels­ius, with humidity — a measure of the amount of moisture in the air — 63 per cent. The Met Office said the maximum temperature was expected to remain between 38 and 40 degrees Celsius on Thursday. Hyderabad was the hottest place in the province on Wednesday as the maximum temperature was recorded at 42 degrees Celsius there.