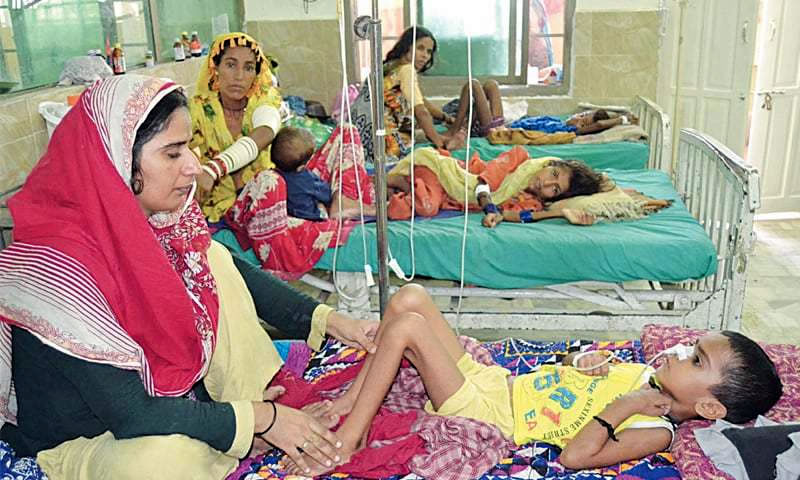 While prolonged power cuts and the harsh heatwave persisted across Sindh, another 337 people — 311 in Karachi alone — died in public and private sector hospitals of the province on Tuesday,

taking the combined death toll to 782 in a mere three days. At least 136 deaths were reported on Sunday and 309 on Monday.

A government official told Dawn that the heatstroke had so far claimed the lives of at least 744 people in Karachi and 38 in other parts of Sindh. On Tuesday, 311 people died in Karachi, eight in Hyderabad, two in Matiari, three in Tando Allahyar, seven in Badin and six in Thatta and Sujawal districts. “We are continuously receiving people in a critical condition or dead; there has been no let-up,” said Dr Seemin Jamali, joint executive director of the Jinnah Postgraduate Medical Centre, where most of the deaths have been reported since harsh weather conditions struck Karachi. “We have recorded 279 deaths so far and there are still a large number of people in our wards,” she said.

Sindh Health Secretary Saeed Ahmed Mangnejo claimed that although heatstroke patients were still being admitted to hospitals in Karachi, their number was coming down gradually. “Awareness is rising about the danger of sunstroke and people are taking precautionary measures,” he added. Scenes of speeding ambulances with sirens wailing were witnessed all day at the city’s major hospitals and outside the Edhi morgue, where officials said their facility had been stretched to the limit because of the persisting emergency situation. According to officials, there are 11,550 beds in public sector hospitals of Karachi, most of which were already occupied by patients with various diseases and were insufficient for the heatstroke patients coming in hordes.

WEATHER: While very hot and humid weather persisted throughout the day in Karachi, a change of wind pattern brought some respite in the evening when a relatively cool sea breeze started blowing. The Met Office said a depression in the Arabian Sea had stopped sea breeze in Karachi for the past few days. It hit the coast of Gujarat on Tuesday morning, causing widespread rains in the region. “Now Karachi is getting south-westerly winds (sea breeze), instead of hot continental winds, and the same will bring down the temperature in the days to come,” it said. The maximum and minimum temperatures recorded in Karachi on Tuesday stood at 41 degrees Celsius and 33.