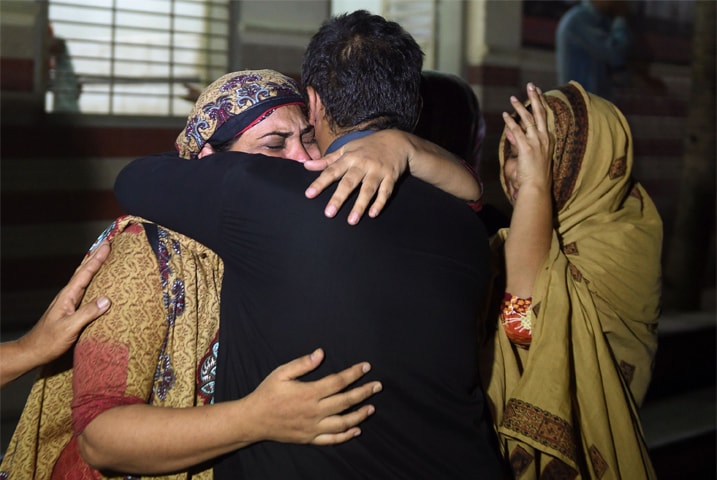 Despite the Met office’s academic conclusion about Karachi’s weather sliding down a notch, a devastating heatwave gripping Sindh for several days has taken a toll of at least 136 people in the province — 132 only in the metropolis.

Most of them were pronounced dead at the Jinnah Postgraduate Medical Centre (JPMC), officials said on Sunday. They said 85 of the people who had suffered heatstroke were either brought dead or died in JPMC.

Thirty people died in the Abbasi Shaheed Hospital (ASH) on Saturday night and Sunday, nine in Lyari General Hospital and six in the Civil Hospital Karachi (CHK). “Some 85 people have died since late Saturday night,” Dr Seemin Jamali, joint executive director of JPMC, told Dawn. Most of them were men aged 50 or more. “Thirty people were brought dead while another 55, who were in critical condition, died in the hospital during treatment,” Dr Jamali said, adding that severe heat was to blame for all the deaths — the alarming number of deaths has no precedent in the country’s recent history. “They were brought to the hospital unconscious, suffering from high grade fever with pulse hardly visible and blood pressure barely noticeable,” said the JPMC official. Many patients told their doctors that they had collapsed suddenly during the sizzling day and suffered extreme breathing problem. The officials said the first patient of heatstroke was brought to JPMC at around 10pm on Saturday and by the filing of this report the number of such patients almost touched 100. “The situation is that we are still receiving patients suffering from heatstroke,” said an official at JPMC.

Dr Salma Kauser, senior director (medical and health) at the Karachi Metropolitan Corporation, which oversees all KMC hospitals, said 20 people died in ASH on Sunday. Seven people were brought dead on late Saturday late and the cause of death was ascertained hours later. Of the 20 people, 13 were brought dead to the ASH and seven died during treatment, said Dr Kauser. Six women and five children were among the dead. She said that more than 100 people were under treatment in various hospitals run by the KMC. Nine people died because of sunstroke in Lyari General Hospital, six in Civil Hospital and two in KPT Hospital. Sindh health secretary Saeed Ahmed Mangnejo said two deaths each were reported from Jacobabad and Larkana. Dr Hasan Murad Shah, director general health, said that since it was Sunday the figures, if any, of the heatstroke patients might be landing his office on Monday. Saturday was the hottest day of this year’s summer in Karachi, where the mercury had shot to 45 degree Celsius. The maximum temperature of 48 degree Celsius was recorded in three districts of Sindh — Jacobabad, Larkana and Sukkur — on Saturday, which slid down to 41 on Sunday.

The officials said the city would not see any let-up on Monday when temperatures are expected to go up to 44 degree Celsius. The highest temperature Karachi ever experienced was 48 degree Celsius on May 9, 1938. “There might be some patients of heatstroke at some private hospitals, but no major hospitals in Nawabshah, Sukkur, Khairpur, Ghotki, Shikarpur, Nausheroferoze, Qambar and Kashmore have reported any such deaths,” Dr Shah said. Similarly, he said, no deaths or heat-related incidents had been reported from central and southern parts of Sindh. Most of the people died belonged to poor neighbourhoods, lived in small houses and worked on daily wages. Officials at the Edhi Foundation said they had expedited the process of burying bodies as the number of new bodies arriving in their morgue had suddenly swollen and also because the temperatures were too high for the cooling facility. Early this month, 17 people died because of heatstroke in Sehwan during the Urs of Lal Shahbaz Qalandar.