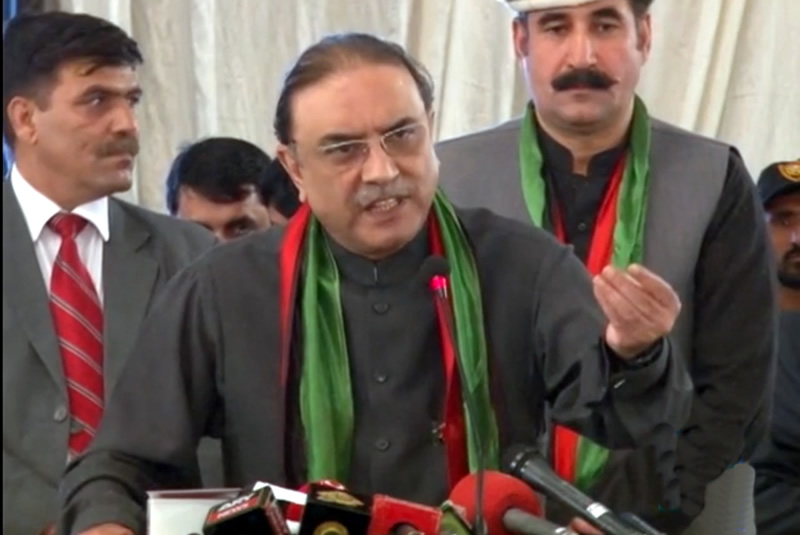 Pakistan Peoples Party (PPP) Co-Chairman and former president Asif Ali Zardari on Tuesday gave a hard-hitting speech, where he lashed out at the military establishment for overstepping its domain.

The former president said army chiefs come and go every three years but the political leadership was here to stay. “We know the country better and we know how to run its affairs,” he stressed.

Speaking at an oath-taking ceremony for party bearers belonging to Khyber Pakhtunkhwa and Fata, Zardari warned the establishment to refrain from character assassination of political parties. “If you do not stop, I will come out with a list of accused generals since Pakistan’s creation.” Zardari went on to say he did not want to weaken the country’s institutions, but “they [establishment] should also not try to create hurdles for politicians.” “This is our country, our army and we want to stand shoulder-to-shoulder with them.” He suggested that the establishment separate itself from politics and not interfere in matters out of its domain. Turning towards the government, Zardari said PPP was a staunch supporter of democracy, which was why his party backed the PML-N government to complete its tenure. “Had we joined Captain [Imran Khan] during his street protest and resigned from the Parliament, elections would have been inevitable.” Zardari said he had supported the government because he did not want them to “later complain they had not been given their due time at the helm.”

“Others might be in a hurry, I am not. I can wait for the sake of democracy,” said Zardari. Talking about his political achievements, Zardari said he had given the country the 18th Constitutional Amendment, which he said was a milestone in the country’s democratic evolution. Referring to former military dictator Pervez Musharraf, Zardari said: “I know the dangers that face Pakistan, Musharraf does not. Had he known, he would not say the things he did.” “I spent five years in jail during the time Musharraf was ruling, but the ‘commando’ is afraid to spend even three months in prison,” said Zardari. The PPP co-chairman said if his party took to the streets, not just Sindh, the entire country’s roads will be blocked. “The whole country from Karachi to Khyber will come to a standstill and will remain so till I order otherwise.”