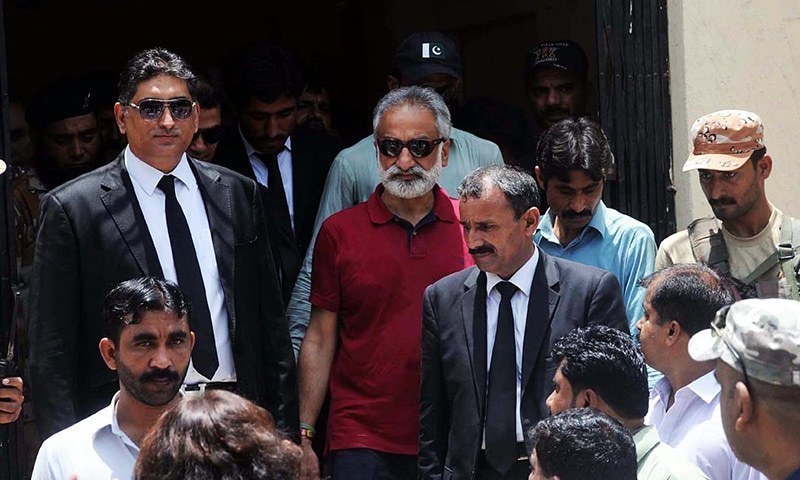 A sessions court on Monday allowed former home minister Dr Zulfikar Mirza to travel abroad for three weeks for the treatment of his MNA wife.

The disgruntled and disowned leader of the Pakistan Peoples Party along with his associates has been booked in over a dozen cases in Karachi and Badin. Dr Mirza’s counsel, Shaikh Jawaid Mir, approached a sessions court and sought permission for his client to visit the United States.

The sessions court is hearing a case against Dr Mirza pertaining to forcibly climbing on to an armoured personnel carrier of police to deliver a speech and allegedly threatening police officers after appearing before an antiterrorism court on May 9. The applicant counsel submitted that his client was willing to proceed to the US along with his wife, former National Assembly speaker Dr Fehimda Mirza, since her doctor advised her to go there as soon as possible for her treatment. He further submitted that Dr Mirza was the only one to look after his wife during her treatment and asked the court to grant him permission for three weeks to travel abroad.

District and Sessions Judge (south) Ahmed Saba allowed the application and observed that the counsel relied upon the recommendation letter of the Sindh Institute of Urology and Transplantation issued by renowned surgeon Dr Adibul Hasan Rizvi. The court asked the applicant to furnish a surety bond in the sum of Rs100,000 and also file an undertaking that he would return within the stipulated period he mentioned in his application.The same court also extended Dr Mirza’s pre-arrest bail it had granted on May 15 in the present case till June 13.

Meanwhile, Judge Bashir Ahmed Khoso of the ATC-I, where four cases against Dr Mirza and his aides are pending, issued notices to the special public prosecutors for June 10 on a similar application moved by the former minister. The disowned PPP leader was booked along with his dozens of aides and supporters in three cases on May 3 for allegedly storming a police station in Badin, abusing the police officials, forcibly shutting down the markets in the district, trying to kill two shopkeepers and robbing their shops. Another case against them was lodged for allegedly attacking policemen, deterring them from discharge of their duty, rioting and damaging property during a sit-in in Badin.

Moreover, the former minister, through his counsel, also moved a same application before the ATC-III, which was hearing a case against him and his associates for allegedly creating a terror-like situation, threatening policemen and obstructing them from performing their duty at the Darakhshan police station on May 16. Dr Mirza was on interim pre-arrest bail in these cases till June 10.