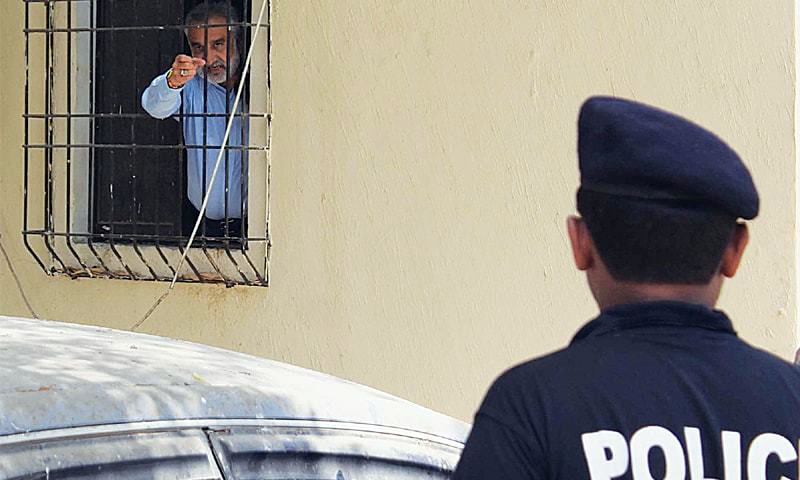 Dr Zulfikar Mirza, a disgruntled and disowned leader of the Pakistan Peoples Party, on Tuesday thwarted the provincial government’s efforts to arrest him as the Sindh High Court on his plea not only restrained law-enforcers from arresting him,

but also served on the provincial and city police chiefs show-cause notices for attempting to take him into custody despite his being on protective bail in all 13 cases registered against him and his associates.

Mirza, who reached an antiterrorism court at around 11am, confined himself inside the courtroom for over eight hours as extraordinary security arrangements were made with hundreds of policemen surrounding the ATC, located adjacent to the SHC. Apprehending Mirza’s arrest, his counsel filed a fresh constitutional petition in the SHC in the late afternoon against the provincial authorities for making arrangements and attempts to arrest him.  Mirza’s wife, Dr Fahmida Mirza, also later reached the SHC as the news about the possible arrest of her husband spread. A division bench headed by Justice Sajjad Ali Shah became irked when the petitioner’s counsel submitted that the authorities had made extensive arrangements for his client’s arrest despite earlier assurance by the government law officer that he would not be arrested.

The counsel pointed out that earlier in the first half of the day, a division bench headed by Justice Naimatullah Phulpoto had taken up Mirza’s petition seeking transfer of all cases against him to Karachi. He said that the bench was also informed that the authorities appeared to have decided to arrest Mirza as a very large number of policemen along with their senior officers had besieged the entire locality around the ATC. He said that the bench had ordered the authorities not to arrest Mirza and act in accordance with the law. The bench headed by Justice Shah issued show-cause notices to the inspector general of police and the DIG-Karachi for disobeying the court’s order and restrained the authorities from arresting Mirza.