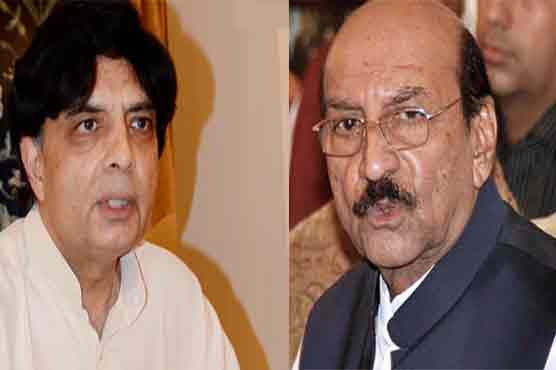 During the meeting, CM Sindh showed reservations over administration’s inefficiency and also complained before Ch Nisar Ali Khan stating that the federal government has failed to give funds and advanced machinery despite tall claims, on whichInterior Minister assured him of resolving the issues by himself. Prior to meeting CM Sindh, Ch Nisar visited Rangers Headquarters Karachi today (Monday) where DG Rangers MajorGeneral Bilal Akbar briefed him about the Safoora Chowrangi bus attack and other acts of terrorism in the city. The Interior Minister appreciated the role of Rangers in maintaining law and order in Karachi.

He said the incidents of target killing have reduced in the city due to better performance of Rangers. DG Rangers expressed the resolve that the terrorists would be brought to the justice at all costs. On the other hand, the investigation officials have finalized sketches of suspected terrorists involved in the bus carnage. Thesketches were prepared with the help of witnesses. Four suspects detained for interrogation in the case have alread been released. Last week, around eight terrorists boarded a bus near Safoora Chowrangi area in Karachi and killed at least 45 people belonging to Ismaili community.