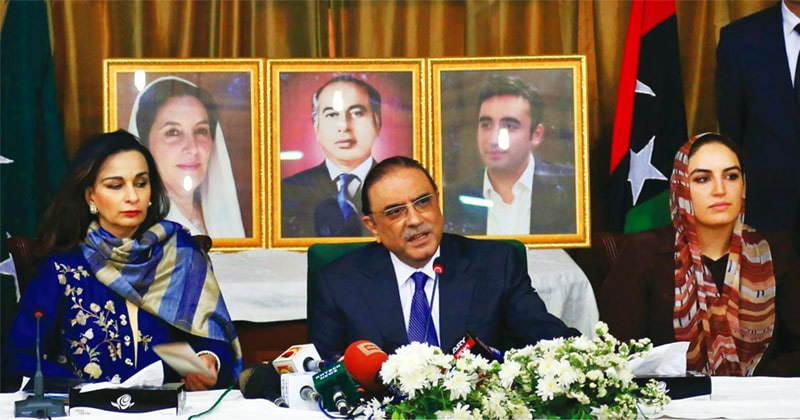 PPP Co-chairman Asif Ali Zardari said on Thursday that his son Bilawal was undergoing training in London and would enter politics gradually because of security risks.

Addressing a press conference at Bilawal House, he said Bilawal Bhutto Zardari, who is chairman of the PPP, could not attend the death anniversary of Z.A.

Bhutto in Larkana because he was scheduled to deliver a speech in London at a gathering held on the same occasion at the same time. Flanked by PPP Senior Vice President Sherry Rahman and daughter Bakhtawar Bhutto Zardari, the PPP co-chairman said his daughter was interested more in business and Zamindari than politics. Clarifying his earlier remarks about the performance of the Sindh government, Mr Zardari said what that he meant was that “the performance was found wanting”.

It did not mean non-satisfaction but that there was a possibility to improve it. He said the electoral system could only be improved through evolution and stressed the need to make the Election Commission financially independent. Mr Zardari said modern technology was being introduced to check corruption in government departments. For example, the ownership of a plot of land could be verified Google Map and ghost employees could be checked with the help of a cellphone worth only Rs 4,000. He said the Sindh government was working to share responsibility of running its schools and hospitals with NGOs.

About the possibility of holding talks with PTI Chairman Imran Khan, he said it was he who had invited him to come to parliament which was the proper forum to raise issues and Mr Khan himself had stated on record that he had come to parliament at the invitation of Asif Zardari. He welcomed the agreement between the government and the PTI over formation of a judicial commission and said that in democracy there was no way other than dialogue to sort out issues. He said Wapda was resorting to 12 to 18 hours of loadshedding in interior of Sindh.

The province had wind, coal and gas and could provide electricity to the rest of the country, he said, adding that LNG was imported without taking the Sindh government on board. He said the PPP would send a delegation to Muslim countries to find a way to resolve the crisis in Yemen. He called on leaders of all Muslim states to sit together to sort out their differences. He said political parties needed to reform themselves by getting rid of bad elements. Mr Zardari assured journalists to help them in arranging soft loans and easy financing to build their homes and advised the Karachi Press Club and the Karachi Union of Journalists to send a delegation to him and the chief minister to get their problems solved.