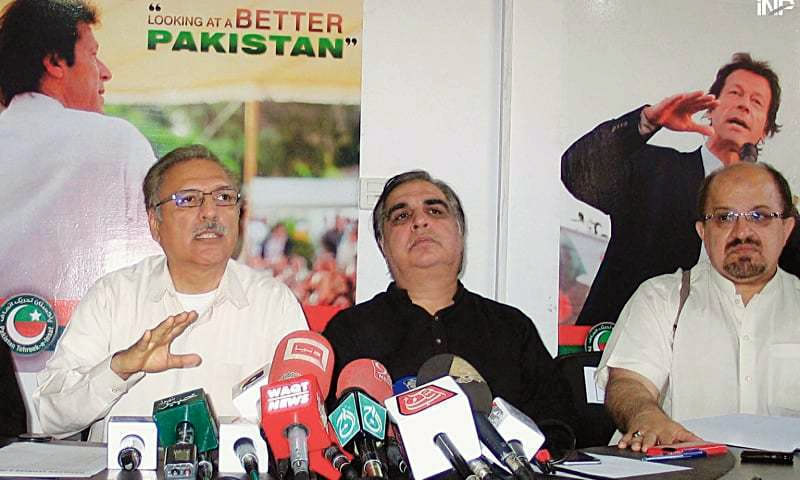 Pakistan Tehreek-i-Insaf (PTI) founding member Imran Ismail today in a press conference in Karachi announced the party’s intent to hold a rally at Jinnah Ground in Azizabad on Apr 19, and said that a request had already been filed with the Deputy Commissioner for permission.

He said, “It is perceived as Altaf Hussain’s house and there could be some trouble, but we want to say we have absolutely no fear … We want to have a rally there.” The central PTI leader said it was a matter of principle for the party to hold a rally at Jinnah Ground. Ismail said that the PTI was going to contend for the seat without forming alliances. “We are in talks with other parties but we are not looking to form an alliance.” “Previously, the Jamaat-e-Islami used to claim that it [Azizabad] was theirs and said ‘no one apart from us can win’. They were defeated by the MQM. No one rules forever. MQM will hopefully be defeated by the PTI.” He appeared to be optimistic about the party’s chances for success, saying “You think that our influence has been diffused ─ I feel our inluence has increased. I am fighting elections on this basis. Did you see the result for Kashmir? All the parties on one side, PTI on one side ─ and we still got a seat. We will show you the same thing today.”

Ismail’s press conference and the announcement of a possible rally in what is dubbed an MQM bastion comes ahead of a bye-election for NA-246 — a constituency left vacant last month when MQM MNA Nabeel Gabol resigned from his seat. The PTI has fielded Ismail as its candidate to contest in the election scheduled to be held on April 23. Ismail is a founding member of the party and is said to be close to its chairman Imran Khan. He often represents the party at talk shows and was a present on stage with Khan during the Islamabad protests last year. Born in Karachi in 1966, Mr Ismail received initial education from Cantt Public School. He graduated from National College and then got higher education in leather and chemical technology from Italy and the US. He started his career as a volunteer for the Shaukat Khanum Memorial Trust in 1992 and played an important role in collection of funds for the trust by organising a mega campaign. In the wake of the devastating floods of 2010 he laid the foundation of Imran Khan Trust and set up an emergency hospital in Jamshoro where medical treatment was provided to a large number of people. He has also to his credit the collection of Rs12 billion in donations in collaboration with Pukar Foundation. During his over a decade long association with the party, Mr Ismail contested for PS-91 which is now PS-115 in 1997 and held various offices including the post of PTI Karachi and PTI Sindh president. At present he holds the office of central deputy secretary general of the party. He had also been a member of KCCI and managing committee of the Orangi Industrial Association.