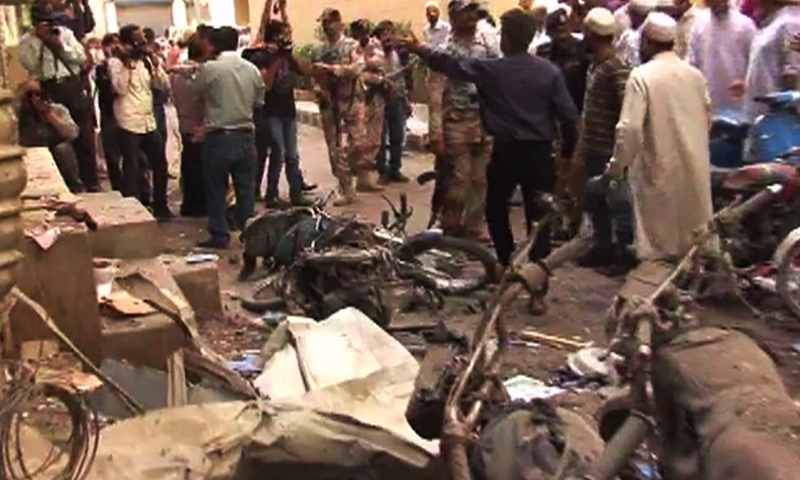 Two people were killed in an explosion that took place during Friday prayers outside the Saleh Mosque for Bohra community worshippers.

Deputy Inspector General (DIG) police Abdul Khaliq Shaikh confirmed that one person died in the blast that took place in the precincts of Arambagh. He added that four people were injured, of which two are in critical condition.

Later, one of the injured persons succumbed to his wounds, taking the death toll to two, police told. The deceased persons were identified as Shabbir and Hasnain, respectively. DIG Shaikh said a timed explosive device was planted on a motorcycle. He lauded the police’s efforts to secure the mosque, and said heightened security prevented a high casualty attack. Sources from Burhani Hospital near the blast site told Dawn.com that around three victims of the blast were brought to the hospital, but were later transferred to Civil Hospital as they appeared to be in critical condition. Speaking to Dawn.com via telephone, senior MLO Dr Nisar Ali Shah at the Civil Hospital said, “We have one dead body and one is on its way here.” Eyewitnesses said it was a powerful blast that occurred during prayers. The Pakistan Chowk area where the explosion occurred is usually congested owing to traffic.

Medical teams at the spot say the narrow streets are making rescue operations difficult. Police and rescue officials said they are investigating the nature or the reported explosion, but that security and rescue teams have been dispatched to the site. The Bomb Disposal Squad (BDS) has reached the site of the blast and is conducting a sweep of the area to determine the amount of explosive material used in the device. Nearby shops and buildings shook and window panes shattered due to the intensity of the blast. Plumes of smoke were seen rising from the scene of the blast. Police officials say that security was heightened as per routine on Friday, as mosques and imambargahs have been under attack in recent months. Condemning the blast, Sindh Chief Minister Syed Qaim Ali Shah sought a report on the incident from DIG Sindh. Friday’s attack was the first on a Bohra mosque in Karachi since an incident three years ago, in which seven people were killed.