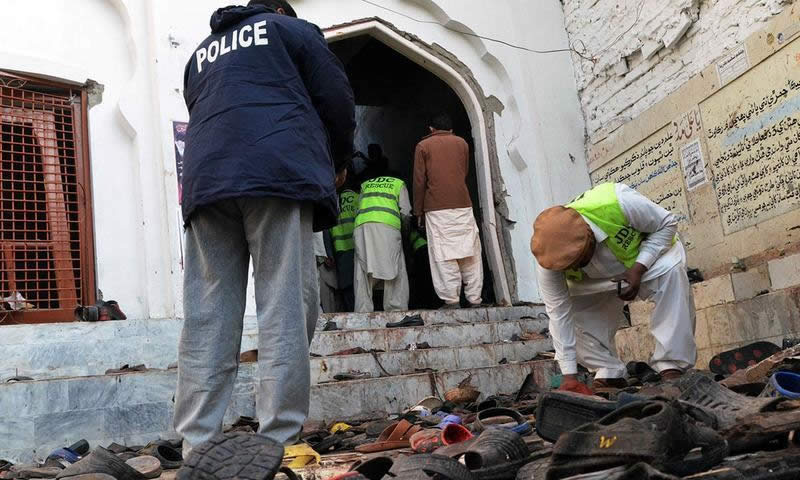 Intelligence agencies and officials investigating the Shikarpur Imambargah attack have identified a militant group operating in the Sindh and Balochistan border areas and which executed the deadly assault,

prompting the authorities to call an inter-provincial committee meeting for better coordination against terrorism and banned outfits involved in targeting the two provinces, it emerged on Thursday.

The decision was reached at at an apex committee meeting, which was jointly chaired by Sindh Governor Dr Ishratul Ibad Khan and Chief Minister Syed Qaim Ali Shah at CM House and attended by Sindh IG Ghulam Hyder Jamali, corps commander Lt Gen Naveed Mukhtar, Sindh Rangers DG Major General Bilal Akbar and top security and government officials. Sources privy to the discussion at the meeting said the chief minister and corps commander were due to fly to Islamabad on Friday to attend a meeting to be presided over by the prime minister on the National Action Plan.

“The meeting discussed the progress made so far on the Shikarpur probe,” said the source. “It was stated that the Imambargah was bombed by the Tehreek-i-Taliban Pakistan group operating in the Balochistan-Sindh border areas. The mastermind of the bombing is in Khyber Pakhtunkhwa and the facilitators were in Shikarpur. The investigators picked up five suspects during the course of probe but later released two of them. Twelve people are under investigation.”

The source’s claim about the presence of militants in the Balochistan-Sindh border areas sounded convincing when Sindh information minister Sharjeel Inam Memon, briefing reporters outside CM House after the meeting, hinted at a meeting of authorities of the two provinces on security. “The inter-provincial committee meeting of Sindh and Balchistan has been called for better coordination in making policies against terrorism,” he said. “The meeting would look into common problems faced by the two provinces and suggest measures that we would move forward for better security arrangements on both sides. It would also help address loopholes on the two sides, if any, while executing the security plan.”

He said the apex committee had approved 64 cases to be forwarded to military courts. “After the implementation of the national action plan began, the Pakistan Rangers, Sindh, have conducted several operations, which led to the arrest of 84 terrorists and 17 killers. The police have also arrested 22 people for illegal use of loudspeakers, nine for hate speech and as many for wall-chalking,” said Mr Memon. Earlier, the meeting expressed satisfaction over the progress of the provincial action plan which entailed action across Sindh. “The meeting said a sharp decline in the cases of kidnapping for ransom was witnessed after the arrest of Tego Khan Tegani — a notorious criminal involved in kidnapping for ransom,” said the source.