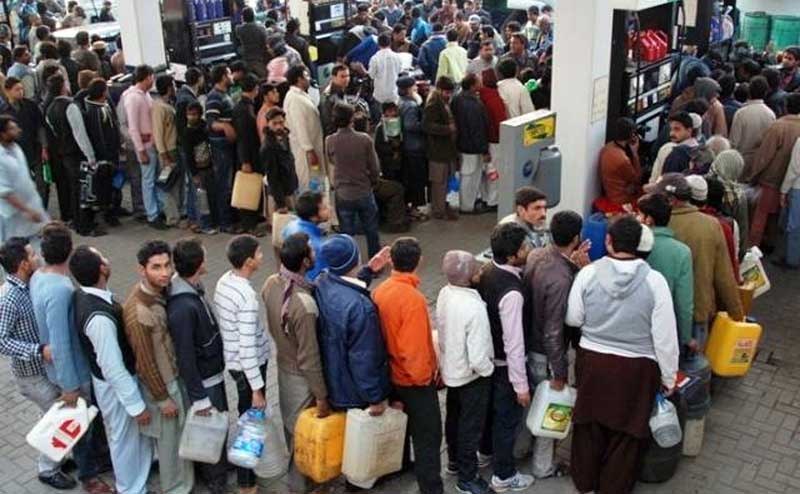 As the shortage of petrol has started shifting from Punjab to Karachi, the government appears to be working on managing the public outrage and panic buying but remains confused over the build-up to the crisis.

Prime Minister Nawaz Sharif, who had cancelled all his official engagements to focus on the fuel crisis, went into a meeting with ministers and bureaucrats on the situation on Monday afternoon and constituted a two-member investigation team subordinate to the ministers for finance and petroleum. At their separate news conferences, Finance Minister Ishaq Dar absolved himself of any direct or indirect responsibility for the petrol shortage and termed it “a conspiracy against the government”, while Petroleum Minister Shahid Khaqan Abbasi apologised to the nation for the hardship and said he be taken to task if found responsible for the crisis. Mr Abbasi said the investigation team would submit its report to the prime minister on Tuesday. He appealed to the public to avoid panic buying as supplies had been beefed up and promised over Rs5 per litre reduction in prices of petroleum products on Feb 1. Responding to a question, Mr Abbasi said he was ready to resign if found responsible for the crisis. Finance Minister Dar faced a volley of questions about non-provision of foreign exchange for oil import, his omnipresence with all aspects of the government and daily stock position of important products.

He took responsibility for mismanagement for being part of the government and agreed responsibility should be fixed, but insisted that there should be fiscal discipline to control circular debt, instead of pointing fingers at his ministry. While the PPP and Muttahida Qaumi Movement submitted adjournment motions to the National Assembly and the Senate, respectively, asking the government to fix responsibility over the fuel crisis, a meeting of the PTI’s core committee accused the ruling PML-N of abject failure and said the party would soon announce a countrywide protest. Leader of the Opposition in the National Assembly Khursheed Ahmed Shah contacted the leaders of a number of opposition parties and they agreed to requisition the assembly session to discuss the fuel crisis. Two standing committees of parliament also expressed displeasure over the fuel shortage and urged the government to fix responsibility after a thorough investigation in a transparent manner, instead of hiding facts. The committee constituted by the prime minister comprises Zahid Muzaffar, an adviser in the petroleum ministry, and Zafar Masud, a chartered accountant. Mr Muzaffar is also chairman and Mr Masud member of the board of directors of Oil and Gas Development Company Limited.

The committee will review correspondences and exchange of daily stock and circular debt positions among supply chains which may include the ministries of finance and petroleum, Oil and Gas Regulatory Authority (Ogra), Pakistan National Shipping Corporation and oil companies. Informed sources said the participants of the meeting presided over by the prime minister remained perplexed over the cause of sudden fuel shortages at most depots, particularly in Punjab. It was reported that about 40,000 tons of petrol had been sold across the country on Jan 1, but it was surprising that 31,000 tons of them was sold in Punjab alone. It was also suspected that petrol was smuggled through Cholistan because of its higher rates across the border. According to an official statement, the prime minister expressed “extreme displeasure over the difficulties being faced by people due to non-availability of fuel”. He was informed that 15,600 tons of petrol was supplied on Monday across the country against an average daily consumption of 12,000 tons and “additional supply will be ensured in the coming month”. The prime mister directed the water and power ministry to immediately reduce line losses and recover the outstanding amount of over Rs500 billion to clear payments due to the Pakistan State Oil (PSO) and other liabilities.

The meeting was attended by the ministers for petroleum, finance and water and power and their secretaries and Punjab Chief Minister Shahbaz Sharif. Petroleum Minister Khaqan Abbasi and Finance Minister Ishaq Dar said the shortage had nothing to do with the financial crunch. Mr Abbasi said the shortage was caused by the exceptional demand in January and delay of a shipment, but claimed that the supply situation had been stabilised and the shortage would completely come to an end within this week. He said CNG stations had been reopened in Karachi and Lahore and petrol supplies beefed up in major cities of Punjab. He said 1.6 million litres of petrol had been dispatched to Lahore against its average requirement of 800,000 litres.

Likewise, supply to Rawalpindi was increased to 575,000 litres against its requirement of 400,000 tons, while dispatches to Islamabad were increased to 600,000 tons against its average consumption of 425,000 tons. This, however, had an impact in Karachi where a number of fuel stations were reportedly closed because of diversion of supplies to Punjab and Khyber Pakhtunkhwa. Besides Karachi, long queues of motorists were seen at fuel stations in other cities and towns of Sindh. Dealers claimed that petrol pumps across the province had received 50 per cent less than the required supply on Monday. “If the trend continues, I fear the situation will not be different [from that of Punjab] in Sindh,” said Abdul Sami Khan of the Pakistan Petroleum Dealers Association.