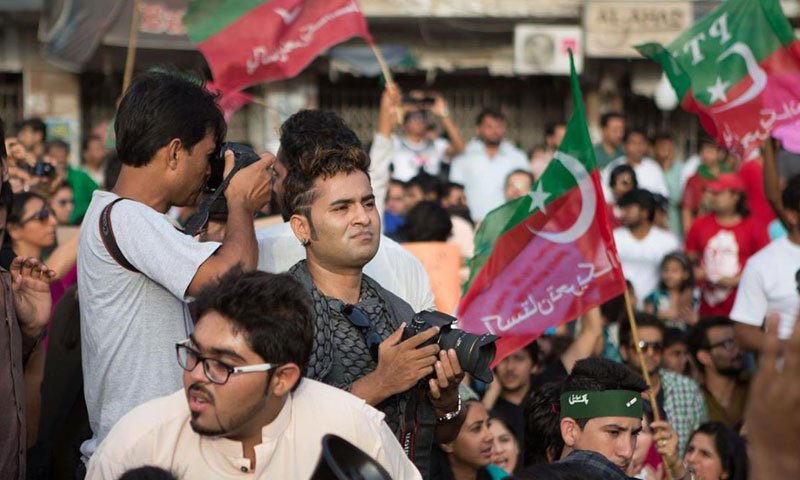 The Pakistan Tehreek-i-Insaf (PTI) has been successful in motivating some associations to voluntarily join its appeal for a citywide shutdown in Karachi, party leaders claimed a day ahead of the strike.

Using the term “shutterdown”, senior PTI leader MNA Dr Arif Alvi told Dawn on Thursday that the essential components of the city’s daily operations, such as transporters and traders, are supporting the party in its bid to hold sit-ins and protests at various points of the city. “It will be a total shutdown. Transporters and traders have responded favourably,” Alvi said. “Peoples’ sentiments are in our favour because Karachi is looking for change.” When asked if the party has entered talks with the Muttahida Qaumi Movement (MQM) to support Friday’s strike, Alvi said, “We have not approached them but we welcome everyone’s support.” President of PTI’s Sindh chapter, Nadir Leghari said the strike will be a ‘peaceful protest’. “The Karachi community will come out and support PTI; there will be no armed goons or thugs and we are not forcing anyone to join. People will chip in if they want change.

” When asked about the financial loss incurred during strike calls in Karachi, Leghari said, “As a party we have much bigger objective that is to change the destiny of Pakistan.” PTI has so far identified National Highway, Sohrab Goth, Netty Jetty Bridge, Shershah, Numaish Chowrangi, Sharae Faisal, Kala Pull Road, Hasan Square, Star Gate and Five Star Chowrangi as prime protesting spots. President Karachi Chamber of Commerce and Industry, Iftikhar Ahmed Vohra distanced himself from the PTI’s strike call. “We are not linked to any political party,” Vohra said. “Any activity hurtful to the economy is not supported by us. We appeal to the government to solve political issues so that the restlessness in the country comes to an end.” Irshad Bukhari of the Karachi Transport Ittehad said the PTI has made no contact with his union. “We will decide when we see the situation tomorrow,” he said. “On MQM strike calls, party members approach us on behalf of Altaf Bhai to observe a strike.

But no such request has come from the PTI.” Haji Dil Khan Niazi, who chairs the All Pakistan Goods Transporters’ Welfare Association, however, said that for the protection and safety of their vehicles, operations will be halted for Friday. “We are not linked to any political party but in case of arson or stone pelting we will not bring our buses on the roads,” said Niazi. Tajir Ittehad Chairman Atiq Mir said his organisation is apolitical and does not support the strike call. “This call has been made amid a political crisis; if even one party is backed then it creates complications,” he said. Reiterating PPP leader Manzoor Wassan’s earlier statement that the ruling party in Sindh will not allow Karachi to be shut down, a spokesperson from Bilawal House said Pakistan’s economic situation cannot afford another strike. -dawn

Smart Beauty Tips With Q-tips For Every Women