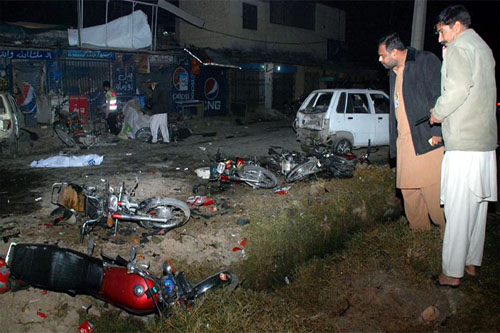 Initial reports revealed that the assailants riding a motorcycle lobbed a handmade cracker bomb from the Ayesha Manzil flyover and managed to flee from the scene.

The cracker fell down on the road close to the gate of Imambargah, injuring eight women and babygirl Batool Ahsan. The injured were hurried to different hospitals while Batool, resident of FB Area, succumbed to her injuries on way to the hospital. Eyewitnesses said there was a majlis scheduled at the imambargha and scores of women were standing on the main gate when the incident occurred. Taking to The Nation, DIG Tahir Naveed said they had already deployed force in the surroundings. He said ball-bearing and nutbolts were used in the cracker.[contentblock id=2 img=adsense.png]

Experts from the bomb disposal squad also reached the site and confirmed the militants used Russian-made hand-grenade in the blast. DSP Saleem Akhtar Siddiqui said the attackers targeted the participants by hurling cracker from the bridge. He said there was a long wall erected on the bridge for safety of the imambargah, and a permanent police mobile was also deployed on the bridge.  Following the blast, a charged mob gathered on Shahrah-e-Pakistan, burnt tyres and blocked road.

They chanted slogans against law-enforcement agencies for the inappropriate security measures. They also condemned the cowardly terror attack and demanded the government to take stern action against the outlaws. Majlis-e-Wahdatul Muslimeen spokesman Ali Ahmer while talking to TheNation condemned the incident and demanded the law enforcing agencies to ensure proper security during Muharamul Haram. He demanded the provincial government to take stern action against the militants groups that are active and are trying to sabotage social fabric of the city.

CIA Jet Crashed With 4 Tons Of Cocaine On Board

CIA Jet Crashed With 4 Tons Of Cocaine On Board