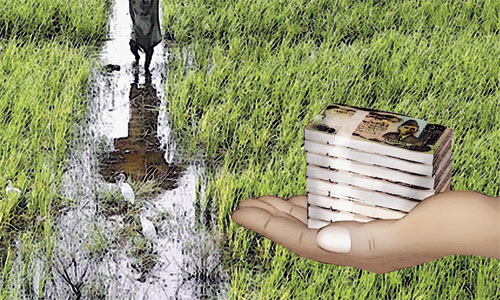 State Bank of Pakistan has announced concessional refinance scheme of Rs10 billion for the revival of economic activities and to facilitate the flow of fresh credit in flood affected areas.

The SBP issued a circular for the banks and DFIs and a press release on Thursday which said that under the scheme, a mark-up of 8 per cent per annum will be charged from the farmers and Small and Medium Enterprises (SMEs) of affected areas by the banks against their financing for production, working capital loans and advances.

According to the circular, refinance under the scheme will be provided to banks at 5pc per annum.   The banks will be permitted to charge a maximum spread of 3pc from the borrowers. Therefore, credit to SMEs and farmers will be available at 8pc per annum. All categories of farmers (owners, owner-cum-tenants and tenants) of the specified areas will be eligible for agricultural loans under the scheme. Principal amount of loans under the scheme will have to be repaid on agreed date between bank and the borrower within a maximum period of one year. Mark-up will be paid on quarterly basis in case of financing to SMEs. However, mark up on agricultural loans will be paid on a half yearly basis.[contentblock id=2 img=adsense.png]

Further, SBP has advised commercial and microfinance banks and DFIs to reschedule or restructure agriculture, SMEs and micro loans and advances of the affected borrowers. “For all such rescheduled and restructured loans and advances, banks, DFIs and MFBs may defer loan provisioning up to September 30, 2015,” said the SBP. The relaxation is available for loans and advances which have become non-performing since September 1, 2014 in the affected areas. According to the provisional estimates of National Disaster Management Authority (NDMA) as of October 15, 2014 the recent flood in the country has caused damages to the rural infrastructure and standing crops affecting around 2.5 million persons of 4,065 villages. The Bank reported that 45 districts covering farming area of around 2.4 million acres is flood affected.

The relief package announced by the State Bank will not only facilitate the existing borrowers in terms of rescheduling and restructuring of their non-performing loans but will also provide farmers, SMEs and micro businesses with an opportunity to revive their agriculture and business activities through borrowing at nominal mark-up of 8pc per annum from the banks. Banks are encouraged to arrange for insurance of the loans provided under the scheme and Mandatory Crop Loan Insurance for five major crops viz. wheat, rice, cotton, sugarcane and maize to avoid risk of losses due to natural calamities. The scheme will be effective from the date of issuance of this circular and will remain valid only up-to December 31, 2015.  -dawn