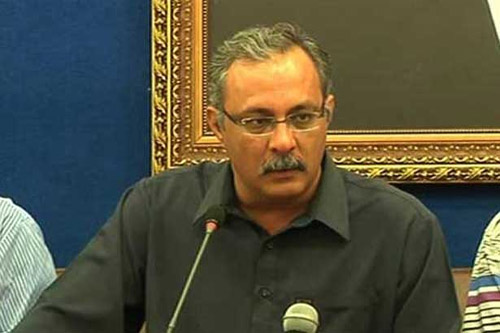 Muttahida Qaumi Movement (MQM) on Thursday staged protest sit-ins in various areas of Karachi against late night arrest of its 30 workers by Rangers.

The protests were held at Liaqatabad, Numaish Chowrangi, Star Gate, Jail Chowrangi and CM House. MQM announced that more sit-ins would be staged at 3-Talwar, Nagan Chowrangi, Rizvia and other areas today.

Paramilitary Rangers force conducted a raid at a sector office of MQM on Abu al Hasan Isfahani Road late Wednesday night where workers were conducting a meeting. The Rangers arrested at least 30 of them. Eight were later released following the agitation.  [contentblock id=2 img=adsense.png]

MQM chief Altaf Hussain announced to commence sit-ins in ‘every street’ of the metropolis against what he called ‘anti-Mohajir animosity’ and the ‘unwarranted’ arrest of party activists. The tension and uncertain law-and-order situation in the city triggered chaos this morning as business activities were closed in several areas.

Police and Rangers beefed up their patrolling as they were put on ‘high alert’. On the other hand, MQM leaders were holding talks with PPP leadership. The party also announced to boycott today’s Sindh Assembly session which passed resolution against division of Sindh. – Samaa