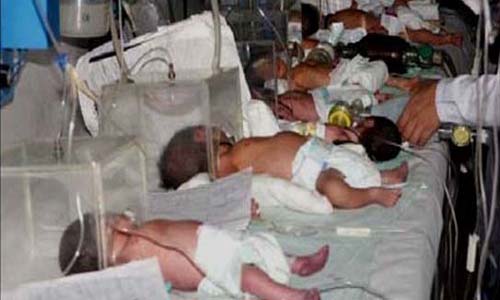 At least nine newborns/infants have died in a neonatal intensive care unit (NICU) of a private hospital in a matter of hours, According to sources, the deceased babies, who were in the incubators or on ventilators, are said to have died after a power failure choked the oxygen supply to the NICU of a children healthcare facility located near Korangi Crossing.

“There have been at least nine infant mortalities since Friday morning”, an official told Samaa TV. The outraged parents took to violent protest following the deaths. “Angry protestors blocked the Korangi Crossing with burning tyres, vandalized the hospital, and staged protest sit-in with the deceased babies demanding justice”, said an eyewitness. Rangers personnel were called in to take charge as police was unable to bring the situation under control.

According to police, the hospital has been sealed to ward off further damage to it, which could lead to loss of evidence. “The doctors, paramedics, and most of the other staff managed to escape except for two employees, who are under arrest”, a police official said. No sooner had the news broken by Samaa TV than Governor Sindh Dr Ishrat-ul-Ebad ordered an immediate inquiry into the tragedy. Stepping in on the matter, Chief Minister Sindh, Syed Qaim Ali Shah has tasked Health Secretary with a prompt report. -saama