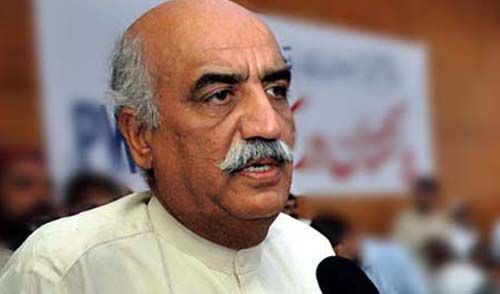 Leader of Opposition in the National Assembly Syed Khursheed Shah has said the country cannot afford a dictatorship and that the judiciary will not endorse any ‘misadventure’.

“The current situation in the country does not allow any dictatorship and the judiciary will also not endorse any misadventure,” Syed Khursheed Shah said while talking to journalists at the airport here on Sunday. Referring to strong reaction from the army on some speeches made recently in the parliament, the PPP leader said “minor mistakes” made by legislators should be tolerated and overlooked. When asked whether the PPP supported the PML-N government or the army in the “tiff between the two”, Mr Shah said his party was “with the masses”.

Answering a question, he said that at a recent meeting with the prime minister, a PPP delegation led by former president Asif Ali Zardari advised him that the Protection of Pakistan Bill was not a good piece of legislation. “Mr Zardari told Mr [Nawaz] Sharif that the proposed law could even be used against the PML-N leaders.” Syed Khursheed Shah said the prime minister was also requested to take the opposition into confidence before moving the bill. The PPP tabled 139 bills after consultation with the opposition during its five-year tenure and about 98 per cent of them were adopted with consensus. “We asked the ruling party to adopt the same procedure and take inputs from opposition benches.”

He said he did not think that talks between the government and the Taliban could continue after the militants’ decision to end ceasefire. Referring to retired Gen Pervez Musharraf’s presence in Karachi, Mr Shah said the former army chief was probably “being gradually whisked out of the country”. The general’s arrival in Karachi could be the “first step in that direction”. He expressed fears that the Sindh government would be held responsible if the former military ruler did indeed go out of the country. Mr Shah said that in a letter the Punjab chief minister had assured Bilawal Bhutto Zardari of “fool-proof security” during his stay in Lahore. -Dawn