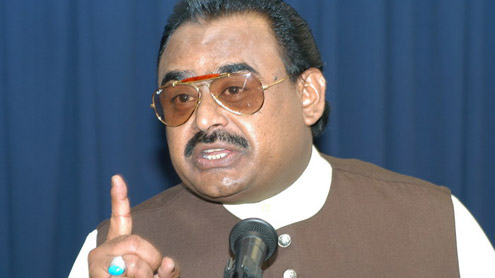 Muttahida Qaumi Movement (MQM) chief Altaf Hussain said on Sunday that if Sindhi- and Urdu-speaking Sindhis joined hands they would be able to liberate their land from ‘others’. He asked them to prove themselves to be true sons of the soil to end hatred.

Addressing from London a ceremony held to launch Sindhi translation of his book “Falsafa-i-Muhabbat” at a hotel here, Altaf Hussain said the entire Muslim Ummah was enslaved and always ready to serve others in their military campaigns. They [Muslim countries] are ready to send their forces to Bahrain, Syria or Somalia. This raises questions about independence of Muslims. The MQM chief said the people of Sindh had been complaining about denial of rights and occupation of their resources.

But they have to actively work to achieve what they want. He urged Sindhi people to support him once and see whether he would be able to get them their rights. “It is a government of Sindhis yet the condition of schools is for everyone to see. What’s the use of such Sindhi government when Sindhi haris and labourers are deprived of their rights?” He said he was resolved to translate dreams of Bhittai into reality and was prepared to be shunned if he failed. He said Sindhis were exploited in the name of politics.

He said Shah Abdul Latif Bhittai had talked about peace not only for Sindh but the entire world and asked why differences were being created between Sindhi- and Urdu-speaking people. “We are sons of the soil like any other Sindhi and will live and die in Sindh. We don’t need any certificate,” he said. “We, the people of Sindh have given nothing to our motherland which is a land of love and peace. We have allowed others to exploit it.” Mr Hussain said if the two communities continued to fight “others’ businesses” would flourish. He asked them to pledge that they would end hatred and become true sons of the soil. “Let’s join hands and liberate our land from outsiders.”