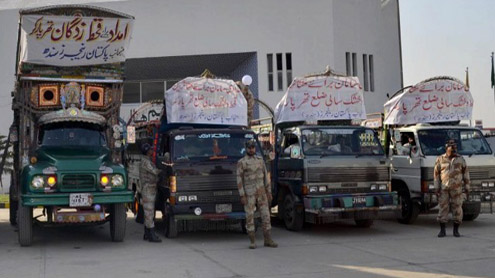 The Sindh government has been in constant action over the past week to provide relief to the drought-stricken people of Thar. According to an official statement, Sindh government officials and the leadership of the Pakistan Peoples Party (PPP) have taken several measures to respond to the situation in the region. On Saturday (March 15), PPP Co-Chairperson Asif Ali Zardari, taking notice of the food shortage in Thar, advised Sindh Chief Minister Qaim Ali Shah to personally monitor ongoing relief activities, the statement said. He also advised Sindh Coordinator for Relief Efforts Taj Haider to remain in Thar until the completion of relief work. The same day, PPP Patron-in-Chief Bilawal Bhutto Zardari visited the drought-affected region on his father’s advice and personally saw relief efforts.

He visited patients at the Mithi Civil Hospital and asked the Sindh CM to expedite relief efforts. The Sindh CM also visited the general and children wards of the Mithi Civil Hospital and advised doctors to make arrangements to send patients to Hyderabad and Karachi, if needed. He announced the expense would be borne by his government and distributed cash among patients. The CM also directed Mirpur khas division officials to make arrangements to distribute wheat among drought-stricken residents in a transparent manner. He himself distributed rations among 200 families and announced Rs200,000 as compensation for each recent death in Thar.

Sindh Information Minister Sharjeel Memon, meanwhile, said maximum facilities would be provided to the people of Thar and all their needs would be fulfilled. The statement, quoting Sindh Minister for Works Mir Hazar Khan Bijarani, said the Sindh government had distributed 52,000 sacks of wheat among drought-stricken people by Thursday (March 13) and medical centers were set up in six districts of Thar. Quoting Taj Haider, it said, rations had been distributed among 104,000 families by Thursday. On Thursday, Sharjeel Memon also said a special package for the people of Thar would be included in the next fiscal budget.

A day before (March 12), the Chief Minister’s Relief Fund was set up for Thar. The Sindh Livestock and Fisheries Department also set up an emergency hotline to work for the prevention of diseases in livestock animals in Thar. In a statement, the same day, Taj Haider said relief work had been started on ‘war footing’ and mobile medical teams were working round the clock to provide aid to the people of Thar. He also said the Sindh government would provide jobs to 6,000 people and lay a water supply line from Islamkot to Nangarparkar.   Tribune