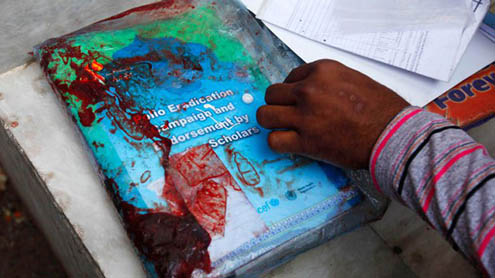 KARACHI: Three people, including two women, were killed when a polio team was attacked on Tuesday in Karachi’s Qayyumabad area.

The attack comes a day after Sindh health authorities began to inoculate some 7.6 million children of the province with polio vaccine as part of a nationwide drive that is to continue until Thursday. The first day of the immunisation campaign had concluded without any untoward incident.

The children of Sindh are among the over 33 million Pakistani children who are being administered with anti-polio vaccine during the National Immunisation Days (NIDs), scheduled to continue until Jan 23.

Pakistan is one of only three countries in the world where polio is still endemic, but efforts to stamp out the crippling disease have been hit by repeated attacks on health teams. Officials blame the violence and suspicions about the vaccine for a surge in cases. Dawn