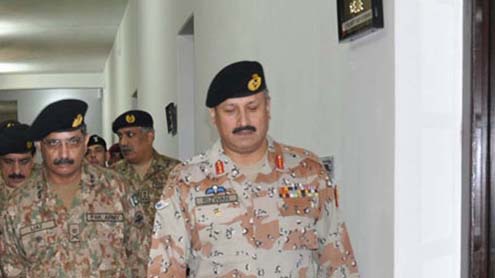 KARACHI: The Director General Rangers Major General Rizwan Akhter on Tuesday expressed concern over the news circulating in the media regarding high-level postings in the police department, and said that the Rangers wanted that the present police setup in the city should continue for a year.

During a high-level meeting held in Pakistan Rangers Sindh Headquarters, the option of discontinuing targeted operations in Karachi was also discussed, said a handout issued here on Tuesday.

The statement added that there was a consensus that the current setup of Karachi police should continue for at least another year so that the ongoing operation against target killers, extortionists and criminals in the city could reach its conclusion.

Karachi, the largest metropolitan city and economic capital of Pakistan, is riddled with targeted killings, gang wars, kidnappings for ransom, extortion and terrorism.

The operation had commenced a few days after the Supreme Court of Pakistan had held law-enforcement authorities responsible for the deteriorating law and order situation in Karachi. -Dawn