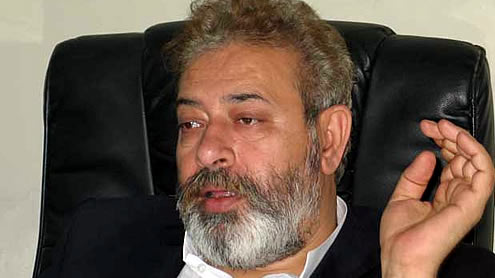 According to police officials, three other policemen were killed and several others wounded in powerful bomb blast. The vehicle of Chaudhry Aslam, was targeted by a bomb blast at Liyari Express way in Issa Nagri area of Karachi. Blast was so powerful that it destroyed two police vehicles completely while nearby buildings were also damaged.

Blast also damaged Flyover Bridge which shows the intensity of the blast. Chaudhry Aslam, was on hit list of terrorists as a day before he killed three dangerous Taliban militants in encounter in Karachi. He has killed and arrested many key terrorists commanders in past. Taliban had targeted him on many occasions.

Last year his vehicle was also targeted at the same place where he killed in Thursday blast. In 2011, eight people were killed and several were injured in a suicide attack on the residence of Chaudhry Aslam on September 19. In 2010 the terrorists blew up the head office of CID in Karachi with the aim to eliminate Aslam and other senior officials. Aslam and other senior officials were not in the building at the time.

The government had enhanced the security of Aslam who had been working against the Taliban terrorists. As the role of the CID chief is very important in taking action against the Taliban, there were threats that terrorists could hit him any time. Aslam had vowed to carry on his mission of eliminating the Taliban from Karachi. – Nation

SP Chaudhry Aslam – A Symbol of Success for Many, Hatred for Others

SP Chaudhry Aslam - A Symbol of Success for Many, Hatred for Others