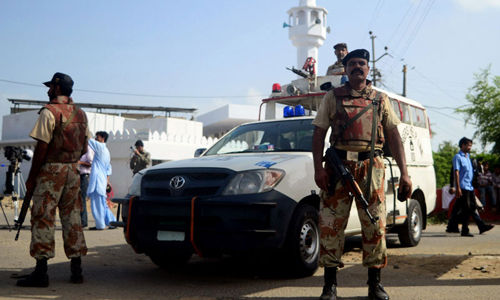 KARACHI: The Pakistan Rangers, Sindh have prepared an elaborate security plan to meet any eventuality during the forthcoming Chup Tazia and 12th Rabi ul Awal celebrations, according to spokesperson.He said that a security conference was held for Chup Tazia and 12th Rabi-ul-Awal celebrations at the Pakistan Rangers Sindh headquarters. The director general of Rangers, Maj Gen Rizwan Akhtar, presided over the meeting. The DDG of Rangers, sector commanders and senior staff officers participated in the meeting.

“Rangers have finalised security plans and will ensure foolproof security,” said the statement.

According to the plan, temporary pickets will be established and manned round the clock. Snipers will be deployed on the rooftops on procession routes and complete route will be sealed off. Sniffer dogs will be employed to clear the route coupled with aerial surveillance.

Routes and terminating points have been identified for processions of Chup Tazia to be taken out from the Nishtar Park and Qasr-i-Musayyab on Friday, adds APP.

According to a police statement issued here on Monday, a procession will be taken out from the Nishtar Park after Fajar prayers and it will terminate at Imambargah Hussanian Iranian Kharadar in the old city area.

After Zohrain prayers, a second procession will be taken out from Qasr-i-Musayyab in Rizvia Society which will terminate at Imambargah Shah Najaf, Martin Road.

The personnel of the law-enforcement agencies and employees of district administration and media organisations have been advised to submit applications for issuance of stickers on Jan 7 and 8 in the office of the deputy inspector general of traffic police (security branch) in the Garden area and obtain the stickers on Jan 9. This is also binding for government vehicles and ambulances.

The vehicles of scouts, welfare organisations, ‘Sabils’, ‘Nazar’ and ’ Niaz’ distributing persons will have to file applications with the Qasar-i-Musayyab, Rizvia Society Karachi (Buturab Scouts 0322-2514034 and 0300-9258337) on Jan 7 and 8, and to get the receipts.-Dawn