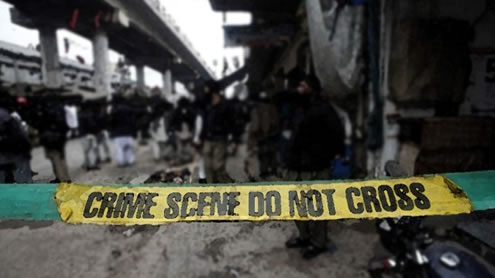 KARACHI: One Rangers personnel was killed and five others were injured in a remote-controlled bomb blast in Karachi, media reported on Thursday.

The blast took place in Landhi near a Rangers mobile. It was reported that three to five kilogrammes of explosives were planted in a motorcycle near the vehicle. According to initial details, two of the Rangers personnel were in critical condition. The injured were taken to Jinnah Hospital. Police and Rangers have cordoned off the area.

On the evening of December 11, a man, his son and their driver were wounded when a low-intensity bomb attached to their car had exploded near NIPA in Gulshan-e-Iqbal, Karachi.

On November 30, a planted bomb had exploded near the Landhi police station. Fortunately, no casualties were reported. According to Express News correspondent Nadeem Khan, the explosives had been planted on a motorcycle that was parked near the police station.

Twin explosions had ripped through shops and vehicles on the main road leading to Ancholi on November 22, killing at least five people and injuring over 50 others. The first blast took place outside a paan shop in a crowded area. Minutes later, the second blast, yards away from the first, took place outside a restaurant.

At least 16 people were reported injured from three consecutive blasts in Karachi on November 13. Two back-to-back blasts had occurred in the nearby Pahaar Ganj, North Nazimabad. Planted improvised explosive devices were used for both explosions, which occurred within the space of an hour. The injured were known to include a police official, a Rangers official as well as three journalists. A third cracker blast in North Karachi Sector 11-B was reported around midnight which had injured two policemen.

Correction: In an earlier version of this story, it was erroneously mentioned that 305 kg of explosives were used in the bomb. The error has been fixed. Tribune