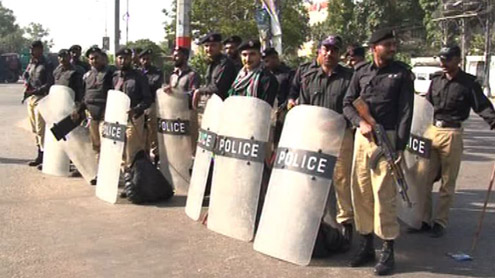 Authorities on Friday put security on high alert in the wake of religious organizations’ country-wide protests against the Rawalpindi incident which claimed almost a dozen lives on Ashura.

As part of security measures in Karachi, police sealed with containers various main roads, intersections and Red Zone where Chief Minister House and the Governor House are located. Officials said all link roads around Guru Mandir, including the Jail Road, Lasbela Road, Jamshed Road and New M.A Jinnah Road, have been sealed with barriers.

Enhancing police and Rangers’ patrolling in Karachi, the government imposed 24-hour ban on pillion-riding in the city. On Thursday, Ahl-e-Sunnat Wal Jamaat (ASWJ) leader Maulana Aurangzeb Farooqi announced that a protest demonstration would be organized at Lasbela Chowk on Friday.

He clarified that his outfit has not given any call for strike in the metropolis. He urged the traders to keep their businesses open today and transporters to bring their vehicles on to roads. Meanwhile, the Shia Ulema Council (SUC) announced to postpone Friday’s protest rallies till Sunday. Security was high alert in Rawalpindi and Islamabad, with Section 144 imposed in Pindi and Red Zone of the federal capital sealed as part of security measures. – Saama.tv