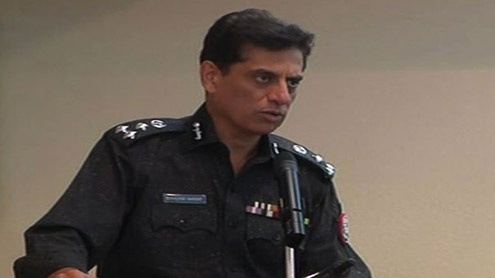 Karachi Police Chief Shahid Hayat Tuesday said that a conspiracy was being hatched to trigger Shia-Sunni clashes in the city.

Addressing a press conference here, Karachi Police Chief claimed that culprits trying to spark-up sectarian clashes would be arrested in 2 to 3 days and would be presented before the media. He said that those involved in Wednesday’s violence had been identified and would be arrested soon, adding that the Rangers were coordinating well with us and they would overcome the target killings.

He further said that Afghan SIMs were being used to make extortion calls. He added that additional contingent of police would be deployed for Muharram security in Karachi. Meanwhile, Information Minister Govt of Sindh Sharjeel Memon has also said that some elements were killing people under a conspiracy in order to fuel sectarian clashes. -Dunyanews