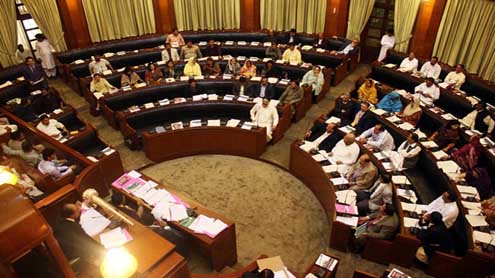 Sindh Assembly session on Thursday raised several questions among all lawmakers due to the ongoing delimitation exercise.

Not only members of the opposition had reservations regarding the matter, but even some lawmakers of the ruling Pakistan People’s Party (PPP) had concerns. The contentions were mostly based on lack of consultations among the people and ministers concerned. “Enough is enough. There is no shame in highlighting the wrongdoings of our government,” said PPP MPA and former food minister Nadir Magsi.

According to the minister, the officials in his areas, which fall in Qamber-Shahdadkot district, have done away with the status of two old town committees that were established around 15 years ago. “No one has consulted us and the bureaucracy is ignoring the local people’s concern in the matter,” he lamented. Reminding the power of people, he said that they elected the government and their protests against government cannot be stopped or ignored. Magsi’s remarks were appreciated by the opposition and many members shouted “shame, shame”, at which the PPP leader took exception and asked to stop using the matter for political gain. Pakistan Muslim League-Functional MPA Mehtab Akbar Rashdi, while endorsing Magsi’s remarks, said, “Officials started the process on provincial government’s dictation, and the process seems administratively difficult but politically easy.”

Terming the shifting of people, who had been living in their constituency for years as ridiculous, she bemoaned that many union councils and villages were missing. She also directed the deputy speaker’s attention towards the politically appointed commissioners, who, being the appellant authority, were hearing public appeals and objections. Mehtab said that their demand to hold the process under the supervision of the judiciary was not being taken into consideration. “People have submitted 66 objections in my constituency in Larkana. I wonder how these politically appointed commissioners would resolve people’s grievances,” she asked.

Agreeing with PML-F MPA, MQM deputy parliamentary leader Khawaja Izharul Hassan declared that all orders were being issued verbally to deputy commissioners who were keeping this whole process under wraps under pressure. Stepping up in protest, Law Minister Dr Sikander Mandhro, and Education Minister, Nisar Khuhro, defended their party, and refuted the claims that the provincial government was influencing the deputy commissioners. They were of the view that nobody would abandon the existing town committees and all objections were being heard without prejudice. “Transparent elections will be held in the province,” they declared.

PML-F MPA also raised the issue of teaching Sindhi language in government schools. Referring to Ebrahim Ali Bhai School in Gizri, she informed that the school after being taken over by an NGO had stopped teaching Sindhi. At her objections, Education Minister Khuhro assured her that the government would look into the matter, and Sindhi would be taught in both public and private schools. Condemning the desecration of Bhuro Bheel’s body, lawmakers demanded provincial government to initiate a judicial inquiry and strictly punish the extremist elements and the police. “Not just the police, but local administration also supported the culprits.

This should be discouraged and government must take action,” said PPP MPA Hasnain Mirza from Badin. Both PPP’s Dr Khatumal Jewan and MQM’s Ponjo Mal supported Mirza on his stance. Bills: The SA introduced two bills in the session. The first one was Gorakh Hill Development Authority (Amendment) Bill, 2013, and the second Sindh Child Marriages Restraint Bill, 2013. -Dailytimes