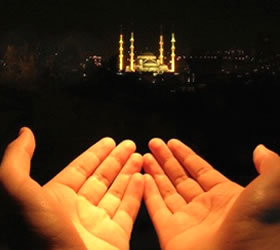 Lailatul Qadr, the Night of Honour considered to be the holiest Night of the holiest month was observed with due religious solemnity and reverence on Monday. The Night falls between 26th and 27th Ramazan in which the believers seek Forgiveness of Allah and His Mercy.

The faithful offered collective prayers to seek Allah’s Forgiveness and divine worship throughout the night till Sehri. Ulema and Khatib threw light on the significance of the night. People distributed sweats among the neighbours and poor. The mosques and houses were profusely lit.

The recitation of Holy Quran in ‘Taraveeh’ prayers also completed on Monday followed by Khatam-e-Quran sessions. The ‘Qaris’ were given gifts and cash for leading the Taraveeh prayers during the Ramazan.

The government had made special security arrangements at the mosques and Lailatul Qadr meetings. Thousands of people gathered at the Darbar mosque to offer prayers and to join the ‘Zikr’ and worship sessions while the mosque was full of worshipers.
Meanwhile, the three-day Mehfil-e-Shabeena organised by Punjab Auqaf Department commenced on Monday. The Mehfil are being held besides Badshahi Mosque, at Data Darbar Mosque and other major mosques controlled by the Auqaf. Central mosques of various sects also organised Shabeena prayers in which the entire Holy Quran will be recited in three days ‘Taraveeh’ prayers.

After the Shabeena, special collective prayers were also held to seek forgiveness for the sins and to save Pakistan from the natural disasters, terrorism, target killings, disunity, anarchy and bad economy and for peace, tranquility, progress and prosperity of the country and the nation.