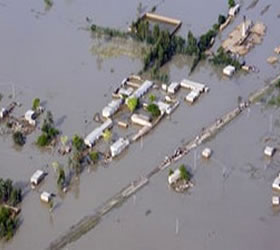 The Provincial Disaster Management Authority (PDMA) on Monday said that a total number of 13,15,012 flood affected people are accommodated in 3,551 relief camps set up by the Government of Sindh.

The PDMA also stated that a total number of 7,277 villages are affected due to floodwater, leaving over 7 million people displaced.

The PPHI said that 10 basic health units that were operational for 24 hours had been fully submerged under water in 13 districts. However, PPHI also provides medical facilities in 305 medical camps, besides, 70 mobile camps moving to facilitate the flood affectees. All the medical camps of PPHI are being looked after by 803 medics and paramedics consisting of 227 male, 103 female, 262 health technicians, 67 LHVs and I19 vaccinators in Sindh.

The report stated that 509,913 patients have been treated at these camps, out of which, 189 patients reported of dog bites cases, 51 of snake bite, while 5344 females and 10,339 children were vaccinated.
Besides, 50 deliveries were carried out by female doctors and some 1500 minor procedures of female patients were also performed at medical camps, report added.

The official report said that CDGK uprooted the PPHI medical camp set up at Razaqabad without any reason. In another report released by Sindh Health Department, said that total 10, 99, 375 patients have been treated from August 31 to September 5, 2010 in relief camps all over Sindh.

Health Department said that patients of different diseases are increasing in relief camps as a huge number of 1,86,407 people especially children reported patients of diarrhoea, 34,449 patients of Gastroenteritis, 1,73,592 of acute respiratory infection, 1,29, 265 patients of malaria, 1,96,580 patients of skin disease, 3855 of head stroke, 76413 patients of eye infections and 298,814 patients of other diseases have been treated in all flood affected districts, so far.

While, 2,95,610 patients have been vaccinated for different diseases and 66,352 people have been provided Hepatitis Vaccination. Besides this 426 deliveries were reported in relief camps and 355 cases of snake bites were also reported. In relief camps 355 anti snake vaccines were vaccinated. -Nation