by Top
in Political Parties, Punjab
0 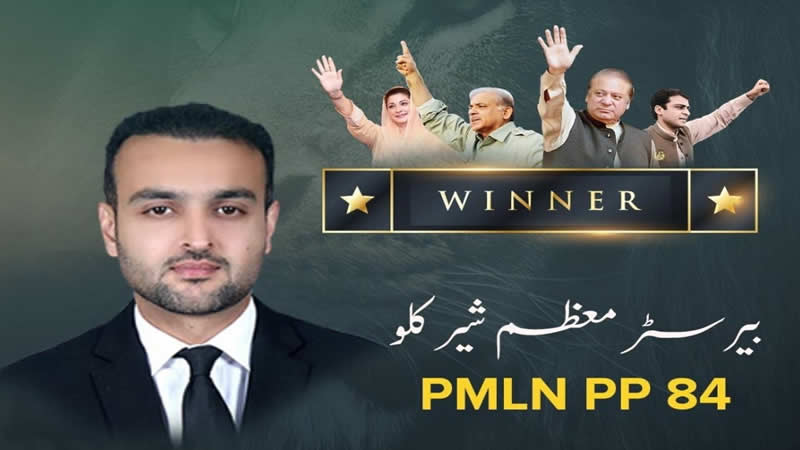 PML-N candidate Barrister Moazzam Sher Kallu won the PP-84 Khushab by-election by a wide margin after securing 73,081 votes, according to provisional results released by the Election Commission of Pakistan on Thursday.

The seat which covers tehsil Noorpur Thal and some villages of tehsil Quaidabad, had fallen vacant due to the death of PML-N’s Waris Kallu who won it four times consecutively. The party gave the ticket to his son, Moazzam.

The deceased MPA had retained the seat by a margin of 6,000 in 2018 general elections while the TLP nominee had bagged over 12,000 votes then.

PML-N President and Opposition Leader in National Assembly Shehbaz Sharif took to Twitter to celebrate the win and said the people had rejected the “flour and sugar thieves”.

“This is also an acknowledgment by the people of the service rendered by the PML-N during its tenure. And this vote is for the development of Pakistan under the leadership of Nawaz Sharif!”

He added that if the PML-N got the opportunity again then it would “serve Pakistan with more passion than before”.

“People in every city have declared Nawaz Sharif’s victory. Supporting Nawaz’s stance from every province is a victory for the people’s right to rule,” she said, adding that those who had tried to remove him from the picture had themselves been removed.

Earlier, PML-N leader Atta Tarar had alleged that bogus votes were polled at a polling station in the Government Girls High School, Jamali Balochan, the native village of the PTI nominee.

Some local analysts had said internal differences among the ranks of the ruling party might go against its nominee.

An official vehicle was provided at each poling station and mobile phones were given to presiding officers to monitor their movement. Police and Rangers were also deployed to transfer election material. Polling had largely remained peaceful.

For 2,374,670 male and female voters, 229 polling stations and 666 polling booths were set up in the constituency. The turnout seemed to be low due to hot weather and Ramazan.

As the polling was underway, a clash was reported between the workers of the PTI and PML-N at a polling station in Jamali Balochan Girls High School.

The DSP Investigation had visited the spot and controlled the situation.