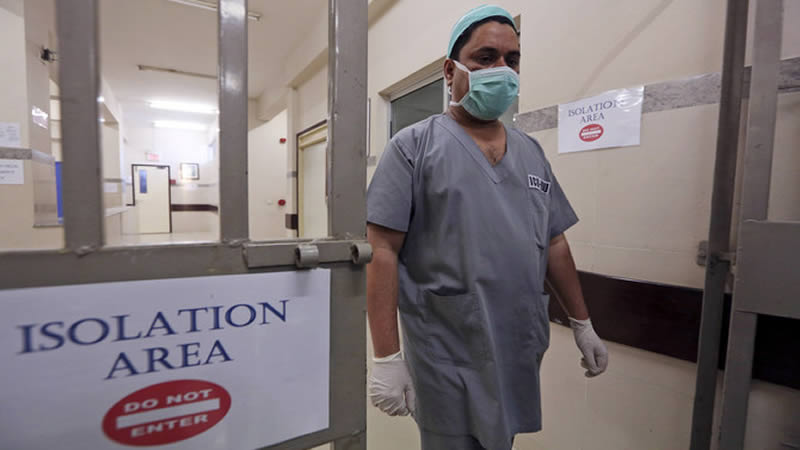 As many as 12 doctors and six paramedics at the Nishtar Hospital have tested positive for the novel coronavirus.

The figures were revealed during a press conference by the Pakistan Medical Association (PMA) on Sunday.

The association called on Punjab chief minister to declare emergency at Multan Nishtar Hospital against the backdrop of the outbreak.
PMA’s regional president Dr Masood Hiraj warned the government that the lives of doctors, nurses and paramedics will be in danger if no immediate action is taken to tackle the growing number of affected individuals.

Hiraj highlighted that out of the 36 doctors tested for the virus, 12 were found infected.

“Moreover, we have conducted tests of further 100 doctors and 28 nurses. The test results are expected on April 13 (today),” he said while outlining the gravity of the situation.

The doctor raised questions about the provision of isolation areas and safety gear at the facility. “The doctors have been quarantined together which raises critical concerns about their safety and wellbeing.”

He alleged that the administration at the hospital was undermining health and safety protocols while dealing with the pandemic.

The leader of the association revealed that doctors on duty in ward 11, Intensive Care Unit (ICU) and burn unit were found infected by the novel coronavirus, alleging that lack of screening and testing had resulted in the dilemma.

The PMA demanded disinfection spray in all wards and hostels to prevent escalation of the crisis. It was stated in the press conference that Nishtar Hospital faces a severe shortage of personal protective equipment (PPE) and testing kits which should to be provided to the administration on an emergency basis.

Moreover, the doctors present on the occasion requested a review of the chief justice of Pakistan’s decision to open the Outpatient Department (OPD), saying that working in the OPD under the prevailing circumstances would pose a danger to the doctors as well as the public.