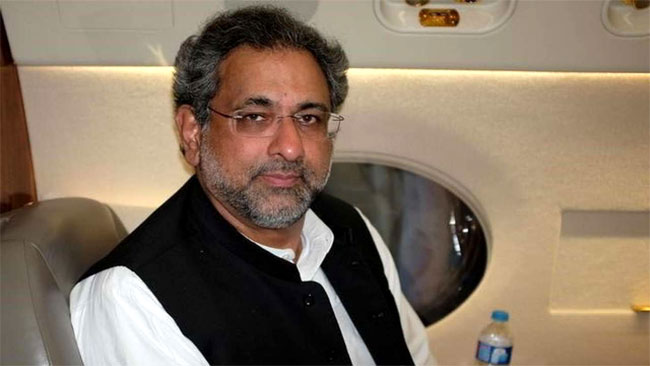 In connection with an ongoing investigation into the ‘illegal’ award of the Liquefied Natural Gas (LNG) contract with Qatar, the National Accountability Bureau (NAB) has on Thursday arrested former prime minister Shahid Khaqan Abbasi near Thokar Niaz Baig toll plaza in Lahore.

Shahid Khaqan Abbasi has been ‘accused of commission of the offence of corruption and corrupt practices’ by the anti-corruption watchdog. A joint action was taken against the Pakistan Muslim League-Nawaz (PML-N) leader by the NAB Rawalpindi and the NAB Lahore. He was accompanied by PML-N President Shehbaz Sharif at the time of arrest. Both leaders were on their way to hold a presser in Lahore.

The NAB will request the accountability court to issue transit remand for Shahid Khaqan Abbasi and he will then be shifted to Islamabad. The accountability bureau had served him four notices to appear before it. Let it be known that Shahid Khaqan Abbasi had skipped the NAB Rawalpindi appearance in a case pertaining to the LNG scandal earlier today.

The erstwhile premier had written a letter to the anti-corruption watchdog and sought time to appear before it. “I received the NAB notice yesterday and it was not possible for me to appear before the bureau on such a short notice.

“Shahid Khaqan Abbasi sought three-day time from the NAB Rawalpindi for appearance.” Shahid Khaqan Abbasi was summoned by the National Accountability Bureau on Thursday (today) in case pertaining to the LNG scandal as the NAB has launched formal investigations against him. According to the NAB notice, “Shahid Khaqan Abbasi possesses vital information regarding the LNG scandal. The national exchequer suffered loss worth billions of rupees owing to illegal contracts.” The Pakistan Muslim-League (Nawaz) leader earlier appeared thrice before of the NAB during the inquiry.

At least eight killed in blast near Kabul University

At least eight killed in blast near Kabul University