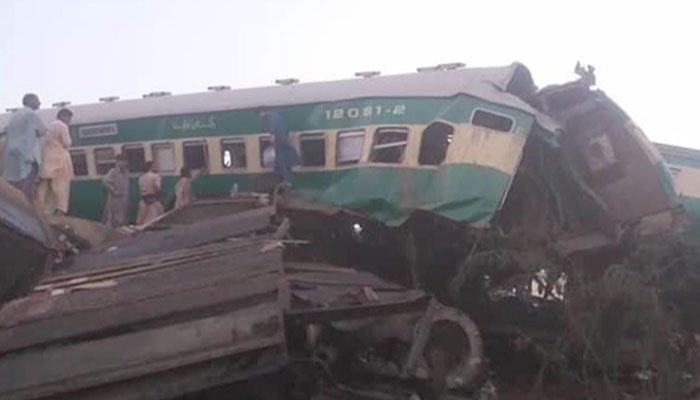 At least eleven persons were killed and 60 others were wounded when Akbar Express collided with a goods train standing at Walhar Railway Station near Rahim Yar Khan in the wee hours of Thursday, reported.

According to details, the passenger train was going to Quetta from Lahore when it collided with a goods train standing at Walhar Railway Station. Police sources said that the engine of Akbar Express was completely destroyed in the accident while three bogies were also damaged, resulting in death of eleven persons while many others sustained injuries.

On the other hand, emergency was declared at all hospitals in Rahim Yar Khan and Sadiqabad after the accident.

President Arif Alvi and Prime Minister Imran Khan expressed deep grief and sorrow over the loss of precious lives in the train accident near Sadiqabad.

In their separate messages, they directed to provide best possible medical treatment to the injured.

In a tweet, Prime Minister Imran Khan said he has asked Railways Minister to take emergency steps to counter decades of neglect of railway infrastructure and ensure safety standards.

Special Assistant on Information and Broadcasting Firdous Ashiq Awan has also expressed grief and sorrow over the loss of precious lives in the train accident.