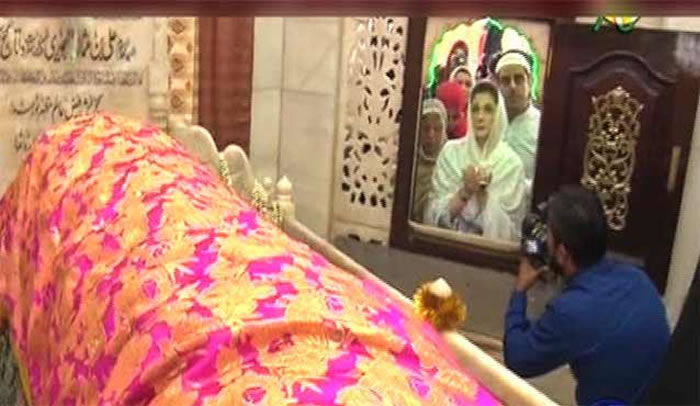 Daughter of sacked premier Nawaz Sharif, Maryam Nawaz, kicked off the NA-120 by-poll campaign on behalf of her mother Kulsoom Nawaz who decided as the ruling PML-N’s candidate.

She arrived at Data Darbar for sought blessings for the good health of her mother who is suffering from an ailment. Maryam hoped that her party wins the by-election, thus consolidating the party’s majority in federal government after Nawaz Sharif was sacked by Supreme Court in Panama case verdict. She laid floral wreath on the grave of Sufi saint Abul Hassan Ali Hajvery. While talking to her party workers, she said the political opponents should realise that the ex-PM stayed silent for a long time and now they should gather courage to listen to what he says.

On the other hand, ECP issued notices to Punjab Food Minister Bilal Yasin and MPA Mujahid Zahoor for violating the code of conduct and entering NA-120 with Maryam Nawaz despite rules against such action. ECP has asked the members of provincial government to respond to the notices within three days time.

Returning officer has asked Punjab chief secretary to reveal the status of Sharif family’s homes in Raiwind and Model Town within three days. Kulsoom Nawaz’s opponent in NA-120 by-poll and PTI leader Yasmin Rashid had filed a complaint that Maryam Nawaz is running the election campaign from both houses.