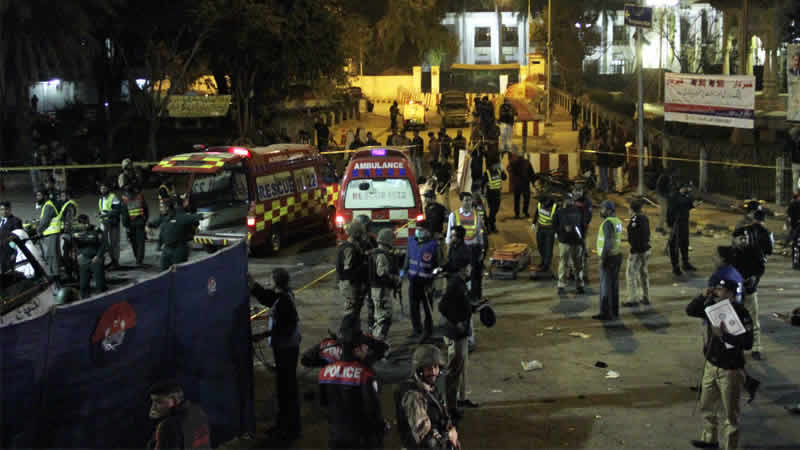 At least 17 people, including two senior police officers, were martyred while more than 70 others sustained injuries when a suicide bomber blew himself up near a protest venue on The Mall in front of the Punjab Assembly building on Monday.

The Jamaat-ul-Ahrar faction of Tehrik-i-Taliban Pakistan (TTP) claimed responsibility for the attack, saying it was just the start.

According to Punjab Police Inspector General (IG) Mushtaq Ahmad Sukhera, Deputy Commissioner Sameer Ahmad Syed, Counter Terrorism Department (CTD) Chief Dr Mohammad Iqbal and other officials, more than 30 of the injured were still fighting for their lives in different hospitals. Government officials confirmed the death of Chief Traffic Officer (CTO) Capt (r) Ahmad Mobin, Senior Superintendent of Police (Operations) Zahid Gondal, two officials of the Elite Force and traffic wardens. They confirmed 11 deaths, while as per media reports, at least 17 people had lost their lives and more than 90 were injured in the attack.

A sit-in protest was being staged by members of the Punjab Medical Stores, Chemists and Druggist Association near Faisal Chowk, The Mall, against the drug act introduced by the Punjab government. Hundreds of people – including women and children – were present there when the incident occurred, while there was a significant presence of law enforcers in the area. The two senior police officials were negotiating with protesters to end the sit-in and open the road for traffic. A heavy contingent of police and rescue teams reached the crime scene soon after the blast and started the rescue operation. Contingents of the Pakistan Army and Punjab Rangers also reached the site and an emergency was declared in all hospitals of the city.

The injured were shifted to Sir Ganga Ram Hospital, Mayo Hospital and Services Hospital immediately. Most of the injured people shifted in Ganga Ram Hospital. According to hospital officials, as many as 46 injured were brought to Ganga Ram Hospital, 28 were being treated at Mayo Hospital and six were shifted to Services Hospital. All medical officers and other paramedics were immediately called back on duty. Security forces cordoned off the area with tents, and the inner cordon was taken over by the Pakistan Army personnel. Forensic teams also started their initial investigation.

Many vehicles parked near the blast site caught fire, triggering panic and chaos in the area. A DSNG of a private television channel was badly damaged following the blast, injuring the cameraman and the driver. Witnesses said the blast occurred when a motorcycle collided with a truck on the road. Punjab Law Minister Rana Sanaullah confirmed that it was a suicide blast, occurred during a protest. Admitting a security lapse, he said the police had failed to maintain a high-level security due to massive participation of people in the protest sit-in. “According to preliminary investigations, it was a suicide attack,” he said, adding that the police officers had been killed in the line of duty. It is pertinent to note here that the federal government had issued a letter alerting police about a possible terror attack in Lahore. A number of citizens rushed to the crime scene as well as different hospitals to inquire about their loved ones who went missing after the incident.