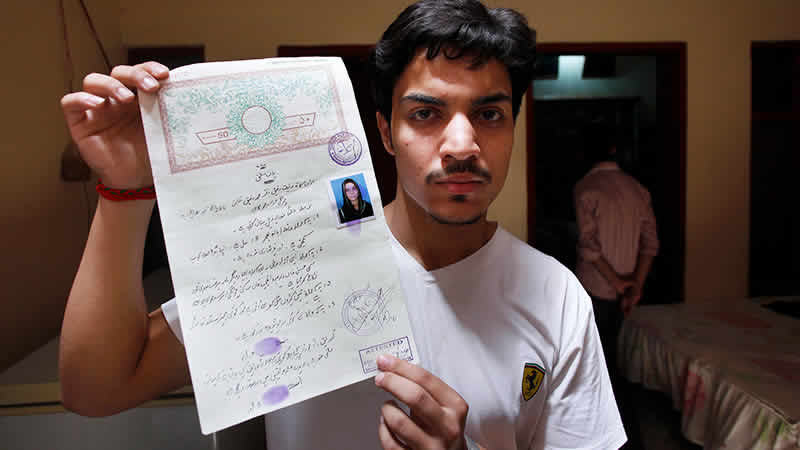 A 16-year-old girl murdered by her mother for marrying the man of her choice was discreetly buried before dawn Thursday by her in-laws, as activists and politicians condemned Pakistan’s latest gruesome honour killing.

Zeenat Bibi was set on fire Wednesday in Pakistan’s cultural capital of Lahore. None of her relatives sought to claim her body, police said Thursday, leaving her new husband’s family to bury her charred remains in the dark in a graveyard near the city. There was a peace and calm in the area during the funeral prayer and burial,” the officer in charge of the local police station Sheikh Hammad Akhtar told AFP. Akhtar said the husband, 20-year-old Hasan Khan, had launched a complaint in the killing against his bride’s mother, Perveen Bibi, who is in police custody.

The victim’s family told AFP how Perveen ran into the street after the murder and began beating her chest, shouting: “People! I have killed my daughter for misbehaving and giving our family a bad name.” An AFP reporter said Zeenat’s family home was closed and locked Thursday. Neighbour Muhammed Asghar said the family had left, adding: “Why have they gone when everybody is coming to share their grief?” Hundreds of women are killed in Pakistan each year for so-called “honour”, but it is rare to hear of such atrocities being carried out by women.

Khan said on local TV that the couple had eloped, but he had reluctantly allowed Zeenat to return to her family home after they promised they would hold a celebration and not harm her. Police have also detained one of Perveen’s sons-in-law, and are searching for another of her sons. Investigators said they were still awaiting the official results from a post-mortem report. Rights activists condemned the killing Thursday as a female politician called for the federal government to detail the steps it was taking to prevent such violence.

Read More: Deadline passes for ‘End of the World’ without Raining fire or Killer Earthquakes

Women continue to face violence in the most atrocious form despite the prevalence of legislation against such acts,” Senator Sherry Rehman told the Senate Thursday. That a family could turn against their own child “shows that there something flawed in law and society”, said Hina Gilani, a human rights activist in Lahore. Anybody, whether father, mother, can do it because they have the satisfaction that they can get away with it,” she said.

Prime Minister Nawaz Sharif vowed to eradicate the “evil” of honour killings after a documentary highlighting the issue won an Oscar in February, but no fresh legislation has been tabled since then. Last week 19-year-old Maria Sadaqat was tortured then burned alive for refusing a marriage proposal from a school principal’s son in Pakistan’s conservative northeast. In April a young woman was strangled and then her body set ablaze because she helped a friend elope in the northwest, another case that sparked revulsion.

US Obesity Epidemic Grows In All Ages