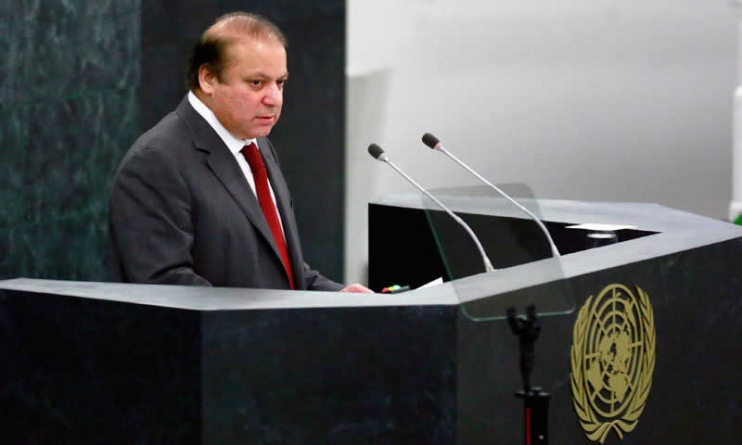 Prime Minister Nawaz Sharif in an address to the nation Tuesday evening said a high-level judicial commission will be formed to probe his family for wrongdoing, after the ‘ leak revealed his sons and daughter owned offshore companies.

The judicial commission will be led by a retired Supreme Court judge, said the premier.

Responding to criticism by his opponents, the PM said that certain individuals are indulged in point scoring and are digging issues from decades ago. “My family has faced a barrage of accusations,” said a visibly displeased Nawaz. The prime minister also invited all politicians hurling allegations against him and his family to present evidence of any financial wrongdoing before the judicial commission. Nawaz, while explaining the start of his family business said, “My father started working in Lahore 25 years before the creation of Pakistan, and by the time of independence, Ittefaq foundries had already achieved success.”

He added that another industrial plant was also established in Dhaka, but was lost with the fall of East Pakistan in 1971. “On Jan 2, 1972, Bhutto took over the foundry in Lahore, and hence our assets were lost in mere moments.” “My family was not involved in politics till much later, as such, even before I got into politics, we were an established industrial family.” Explaining further, the prime minister stated that his father established another industrial plant in Makkah, following the military coup in 1999. The plant was “later sold, and my sons invested the funds into their businesses.”

Pakistan Tehreek-i-Insaf Chairman Imran Khan on Monday demanded that the National Accountability Bureau (NAB) initiate a thorough investigation into the financial holdings of Prime Minister Nawaz Sharif, following the massive leak of secret files from a Panamanian law firm. “Probes have already been initiated in several countries – including Australia, New Zealand, Sweden and France  across the globe after their leaders and office bearers were implicated,” said Imran. Imran said the data leak was a defining moment for Pakistan, adding that:

“How can those who launder money from Pakistan to offshore accounts ask others to invest in Pakistan?” The data leak has revealed financial wheelings and dealings of Prime Minister Nawaz Sharif’s family, among dozens of others, including world leaders. The data from the Panama Papers, available on the website of the International Consortium of Investigative Journalists  one of around 100 news organisations and 300 journalists that worked on mining the data simultaneously  also reveals the offshore holdings of members of Prime Minister Sharif’s family. According to documents available on the ICIJ website, the PM’s children Mariam, Hasan and Hussain “were owners or had the right to authorise transactions for several companies”.

Mariam is described as “the owner of British Virgin Islands-based firms Nielsen Enterprises Limited and Nescoll Limited, incorporated in 1994 and 1993”. On one of the documents released by ICIJ, the address listed for Nielsen Enterprises is Saroor Palace in Jeddah, Saudi Arabia. The document, dated June 2012, describes Mariam Safdar as the ‘beneficial owner’. According to ICIJ, “Hussain and Mariam signed a document dated June 2007 that was part of a series of transactions in which Deutsche Bank Geneva lent up to $13.8 million to Nescoll, Nielsen and another company, with their London properties as collateral.”

Hasan Nawaz Sharif is described as “the sole director of Hangon Property Holdings Limited incorporated in the British Virgin Islands in February 2007, which acquired Liberia-based firm Cascon Holdings Establishment Limited for about $11.2 million in August 2007”. But the papers are not necessarily evidence of wrongdoing. According to The Guardian, using offshore structures is entirely legal.