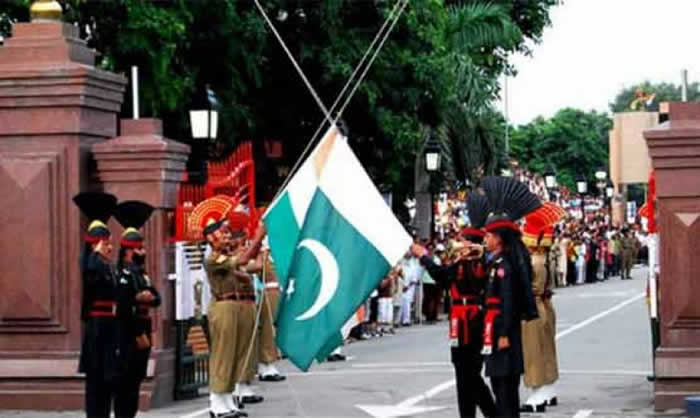 Pakistan Day on Wednesday was been celebrated across the country with great enthusiasm, especially at Wahgah Border, Ganda Singh Border and Gulberg Main Boulevard, Lahore where the patriotism and buoyancy of Pakistan Rangers’ personnel were reaching new heights.

Flag lowering ceremony at the Wagha Border touc the spirit of the entire nation. The army band s heart pumping performance at the occassion and the tremendous parade by the soldiers made the people raise slogans of ‘Pakistan Zindabad’ out of excitement. Rangers personnel, staring into the eyes of the soldiers across the border and holding the national flag into their arms with pride was a heart-warming moment for the spectators.

Same scenes were seen at Ganda Singh Border, Kasur, where the armed forces band played enthusiastic national tunes in the ceremony arranged on Pakistan Day. Rangers’ parade was also held at the border which was worth attending.

On the other hand, Azm-e-Pakistan parade was held at Gulberg Main Boulevard, Lahore, which also became an attraction for the people. More than 100 drum-masters and one of the tallest men and women in the country also participated in the parade.

Several floats and riders on heavy bikes also participated in the parade. Organisers of the parade aimed to renew love for the country as well as to provide entertainment to the citizens.