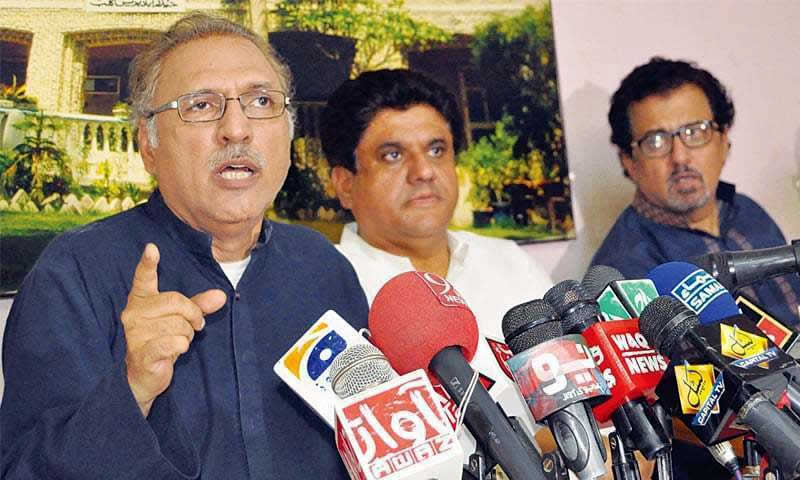 With the ruling PML-N and opposition Pakistan Tehreek-i-Insaf (PTI) set to flex their political muscles in the by-election for NA-122 constituency on Sunday, the war of allegations between them has intensified.

According to analysts, the by-election has triggered a harsh blame game because it has turned into a high-stakes battle between the two parties. “Although it is just one constituency, it carries huge symbolic importance for both the sides,” said a political commentator. “If the PTI wins the by-poll, Imran Khan will breathe more fire down the neck of Prime Minister Sharif and repeat his allegations about rigging in the 2013 general elections.

“If Ayaz Sadiq emerges victorious, the PML-N will vehemently reiterate that the general elections were held in a free and fair manner.” Talking to reporters at the Press Information Department in Islamabad, Mr Rashid repeatedly referred to a petition filed with the Election Commission of Pakistan (ECP) by Akbar S. Babar, a founding member of the PTI who later developed differences with the party leadership. Mr Babar has claimed in his petition that the PTI received funds from Jewish and Indian lobbies based in the US.

Making the petition the basis of his arguments, the minister termed the PTI chief an “anti-state actor and a traitor involved in conspiracies with foreign agents to overthrow an elected government and create chaos in the country”. “Had Mr Khan managed to win the general elections and form government with the help of financial assistance from Jews, Hindus and other anti-Pakistan lobbies, what would have happened to the country,” he asked. The minister also criticised the ECP and the media for not taking the former senior member of the PTI seriously. “The ECP takes no time to cancel our Kisaan package, but is sleeping on Mr Babar’s petition over the past 13 months.

Likewise, the media relishes criticising the government, but does not pay attention to what the founding member of the PTI has been saying about foreign funding of his own party.” PML-N lawmaker Daniyal Aziz, who of late has emerged as one of the top defenders of the government, said that documentary evidence of funding to the PTI “used in anti-state activities” in Pakistan was available with the US justice department.

China's Smoking Death toll to Double to 2 Million in 2030: study