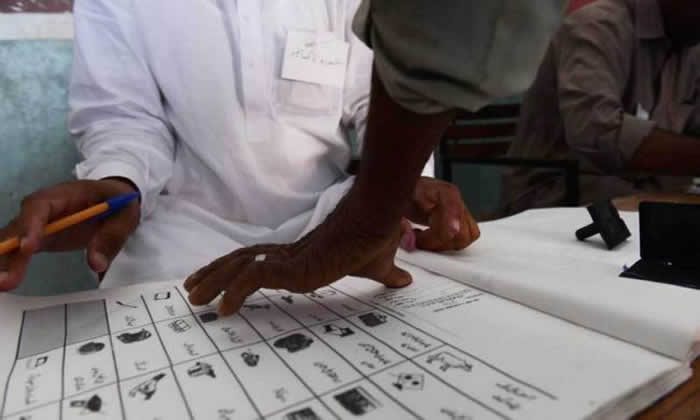 Voting is underway on Tuesday for by-elections on PP-16 provincial assembly seat in Punjab’s Attock district. The polling began at 8am and will continue until 5pm without any pause.

The PP-16 seat fell vacant after the killing of Punjab home minister Shuja Khanzada in a suicide attack on Aug 16.

nly two candidates are contesting for by-polls in the PP-16 constituency, which are being held under the supervision of army and Rangers. Jahangir Khanzada, the son of Colonel (retd) Shuja Khanzada, is contesting on a Pakistan Muslim League-Nawaz (PML-N) ticket against Mohammad Naeem, an independent candidate. No political party fielded its candidate to contest the by-polls against Jahangir Khanzada. A total of 206,669 citizens will exercise their voting rights in today’s by-polls. The number of male voters registered in the constituency is 114,027 while the number of female voters is 92,642. The number of polling booths reserved for male voters is 244 while that of female voters is 181.

Elaborate security arrangements have been made in wake of the by-polls in Attock district, with some 900 Pakistan Army and Rangers personnel, and about 1500 police personnel deployed inside and outside polling stations. The Elec­tion Commission of Pakistan earlier last week ordered the deployment of army and Rangers both inside and outside polling stations during the by-elections in NA-122 (Lahore), NA-144 (Okara), NA-154 (Lodhran), PP-147 (Lahore) and PP-16 (Attock) constituencies, Dawn newspaper reported. According to a spokesman for the commission, the decision was taken because of the volatile law and order situation in the country and on the demand of the Provincial Election Commissioner, Punjab.

Sound and Fury Over Nandipur Come to Naught