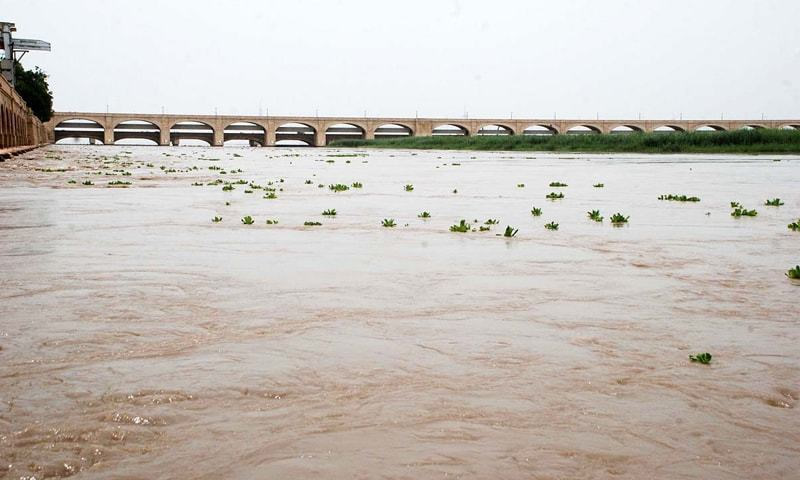 The Flood Forecasting Division said on Monday that River Indus was in high flood at Chashma and Kalabagh and in medium flood at Taunsa whereas the Met Office forecast heavy but scattered rains across Punjab and Kashmir for 24 hours with an interval on Wednesday and continuation of the wet weather from Thursday to Saturday.

“In Indus, the water inflow and outflow at Chashma and Kalabagh are 515,000 and 511,000 cusecs and 513,000 and 505,000 cusecs, respectively. It indicates that the river is in high flood at these spots while it is in medium flood at Taunsa where inflows and outflows are 371,000 and 367,000,” FFD official Mohammad Tahir told Dawn. He said Jhelum at Rasul headwork was in low flood as water inflow and outflow there were 110,000 and 99,000 cusecs. Ravi and Sutlej are in below the low flood situation.

The official said Chenab was in low flood with 90,000 and 61,000 cusecs inflow and outflow at Marala, 139,000 and 122,000 cusecs at Tareemu and 124,000 and 119,000 cusecs at Panjnad. But the Met Office forecast heavy rains with thunderstorms across Punjab and Kashmir. “The weather will be partly cloudy with scattered rains in Punjab and Kashmir in the next 24 hours,” Shahid Mehmood, a met official said. There could be interval in rains on Wednesday, but there would be another spell of rains on Thursday and it might continue till Saturday, he added.