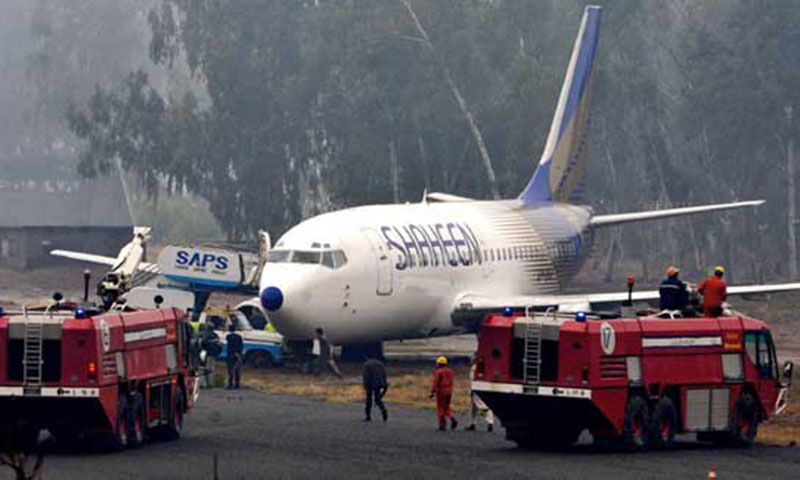 An aircraft of a private airline skidded off the runway at the Allama Iqbal International Airport, forcing the Civil Aviation Authority (CAA) to close it for flight operations on Tuesday and Wednesday morning.

According to a spokesman for the CAA, the private airlines’ flight NL-48 carrying 172 passengers was coming from Karachi. “During landing the aircraft skidded off the runway at about 3.25pm. However, all passengers remained unhurt,” he said. The main runway was closed for all flights, forcing the PIA and other foreign and private airlines to use the ‘standby runway’.

The passengers who reached the airport to catch their domestic or international flights faced great deal of inconvenience as all flight operations remained suspended for several hours after the incident. “We were told that our flight to Karachi would depart a couple of hours behind schedule but after waiting for several hours the PIA said the flight had been cancelled,” a passenger, Razzak Ahmed, said.

He wondered why the PIA had cancelled his flight when the flights bound for international destinations were able to leave. At least five international flights of the PIA were delayed and one Karachi-bound flight was cancelled. “PIA flights to London, Toronto, New York, Paris and Milan were delayed for several hours because of the closure of the main runway,” a PIA spokesman told Dawn. He said the arrival of at least five foreign airline flights from Gulf and Bangkok had also been delayed because of the mishap.

However, a CAA spokesman said some 18 flights left for their destinations from Lahore airport and 10 arrived. “It is fog that forced the delay of the flights arriving here in the evening and not the closed runway,” he said, adding that equipment was being transported to Lahore from Karachi by the private airline on Wednesday (today) to remove the airplane from the runway. “An inquiry has been constituted to investigate the incident,” he added. -dawn