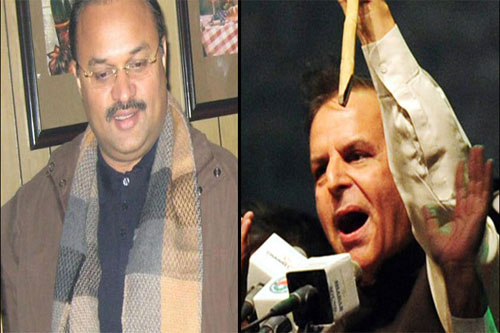 Deserter of Pakistan Tehreek-e-Insaf (PTI) Makhdoom Javed Hashmi, who is contesting NA149 seat, said Imran Kkhan did not solicit masses to vote against him.

Shah Mehmood Qureshi is adamant on his defeat. Meantime, PTI-supported independent candidate Amir Dogar vowed to join the PTI after win in the by-elections.

Talking Madia, Hashmi remarked the title of ‘Daghi’ (tainted) was given to him by Shah Mehmood Qureshi, not the PTI. He added, “Shah Mehmood wants to defeat me. Imran Khan did not advise anything to his voters in Multan.” Hashmi announced to continue in his independent status if he wins the by-elections and reaches the Parliament.

The former PTI leader asserted he suffered imprisonments and tribulations for the sake of his principles, adding he will do whatever is right with no regard to happiness or gloom to anyone, whosoever. Talking Amir Dogar announced he will join rank and file with the PTI and will abide by the party discipline. Replying to a query regarding the resignation in case he joins the PTI after victory in the by-elections.

Dogar said it is quite premature for him to comment on the resignation issue. Dogar said he has the support of several political parties, in addition to the PTI, including Nawaz League, Pakistan People’s Party (PPP) and Jamaat-e-Islami (JI). –SAMAA